Tail Dragger and Bob Corritore: Longtime Friends in the Blues

Tail Dragger and Bob Corritore: Longtime Friends In the Blues.

Howlin' Wolf~ "One day this boy (Tail Dragger) will take my place." 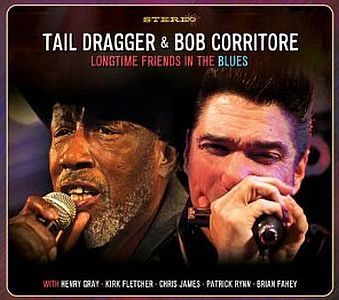 blues with a Delta influence. Like a good friend, this record not only knows your soul, it reads your mind. This record finishes your thoughts before you've known you had them. As in 'I'm Worried, " and "Sugar Mama," there are many times in listening to this collection that you want the lyrics to be repeated just once more, and Tail Dragger keeps on. Thinking you want some harp to keep you company? Enter Bob Corritore. This collaboration is equal in these partners don't overpower each other, which makes you want to hear more from them. Even in the arrangement of the tracks for the recording, there is a mindful sensibility. After "Done Got Old," you may think, this is some heavy blues that cuts to the core of life's troubles, such as worry, aging, loss of trust. And then the first bars of "Boogie Woogie Ball" come through! The blues are about resilience, facing life on its terms with all that you've got. Just when you need it, Tail Dragger says, 'Have Joy!"

From the liner notes: "Tail Dragger and Bob Corritore first met on January 11, 1976 at the 1815 Club on Chicago's West Side where they performed at a tribute to Howlin' Wolf, who had died the day before. This was the symbolic beginning of a lifetime of friendship and musical collaboration."

According to the Delta Groove biography:

Tail Dragger: Mr. James Yancy Jones was from . He relocated to in the 9160's, where he befriended the legendary, Howlin' Wolf. He would sit in and play at shows when Wolf was on break. Often late for gigs, Mr. Wolf gave Jones the nickname, Tail Dragger. Tail Dragger has been dedicated to the blues as a vocalist since his early influences. He started his solo career in the 1970's. "Low down blues is all I like, All I feel ... And I sing what I feel."

Bob Corritore: Mr. Corritore has been a band leader, club owner, record producer and radio show host, all with the enthusiasm to promote the blues in the 21st century. His album, Harmonica Blues, won a Blues Music Award for Historical Album of the Year. This collection of harmonica masterpieces was honored with the presence an entire line up of legendary performers, including: Koko Taylor, Little Milton, Pinetop Perkins, Honey boy Edwards, Robert Lockwood Jr., and Willie "Big Eyes" Smith. He also received a Governor's award in the state of for his accomplishments in recording.

1. I'm Worried- Tail Dragger's voice bellows as this album opens. Bob Corritore's harp jumps in quickly and the legends march on. Tail has a great 'whooo-hoo' that is reminiscent of Son House and the Delta Spirit. In the blues, the resilience is celebrated by calling life's problems out straight. Mid-song Tail improvs, "Let's worry!" Piano from Henry Gray adds to the upbeat tempo. The song has a quiet fade that comes to a close which is almost comforting, even though Tail continues to sing about how everyone is worried.

2. Sugar Mama- This Tampa Red original released in 1934 as Sugar Mama Blues No.1, was recorded by Sonny Boy Williamson and Howlin' Wolf (My Country Sugar Mama) and is a blues standard. There is a guest vocal by Henry Gray which mirrors some of Tail Dragger’s lyrics and sort of extends the call and response frames of this blues classic. “I like my coffee in the mornin’, woman, crazy bout my tea at night. If I don’t get my sugar three times a day, oh darlin’ I don’t feel right”

3. Birthday Blues- Be glad that it's somebody's birthday somewhere each day, because you will be spinning this great upbeat, clever song all the time!

4. She's Worryin Me- Worried and got no where to go? The blues keep the time for the ages. Tail Dragger has got some pain and advice to share in this gem. The harp flows through in the background, with guitar accents and Patrick Rynn's bass lines keep it interesting. There are layers and layers of instrumentation on this record. The piano, harp and guitars jam together in a great bridge, but yet, given the tone of the topic, the whole song is low key. A masterpiece.

5.  Cold Outdoors- Tail's voice is a bit softer and the band brings some rhythm to this track.

6.  So Ezee- Henry Gray commands a strong comment of wisdom at the dawn of this jam. He starts off slow and rises to the level of reverend with a powerful message. "You know, this is the message to the world, the old folks and the young ones too. Wake up and stop cracking jokes and use your head, cause it's so EASY to be mislead, whatchasay!" The song is then a blare of harp, guitar and swang rhythms with Gray at the piano while Tail takes the lead with a little back and forth with Gray.

7.  Through With You- "I want you for my wife, baby you've got to change your life!" He knows there's another man, and the song says he's through with her, but seems like there's another chance yet to be had. Life is not always easy, why would love be any easier? Blues, indeed!

8.  Done Got Old- A straightforward belt of time and place with Bob on the harp, this song rages on, all the while there are some great guitar licks coming through and Brian Fahey does some steady drum work to keep it all together.

10. Please Mr. Jailer- This heart sung angst of a man begging for his woman to be released is a ballad for the soul. The spirit of it reminded me of the legendary "Gallis Pole" by Leadbelly.

Longtime Friends In The Blues, with its roots in Delta history, Chicago city swank and the advice of life sages, streams blues music as it should be. Blues revelers will be inspired, while new generation listeners will be educated. This is a great, and soon to be historic, record for any collection.