Details
Written by Bluebird
Published: May 18 2012

Dreamy, ethereal, Bon Iver-esque vocals with thoughtful lyrics are the first impressions of The Radioactive Grandma trio works.  As the tracks keep streaming from their self titled LP, it turns into intense contemporary acoustic rock music that parallels the popular work of Mumford and Sons. Jamming guitars press lyrics into urgency without apology. Yet, there are echos and riffs that keep the sound in the popular rock category of what resembles early REM. Global influences seem to interject themselves as well.

Does this make any sense at all to the listening audience? You have to hear Radioactive Grandma for yourself. And everyone I've discussed this album with asks me, "How did they get this name?" Perhaps we need to schedule an interview! 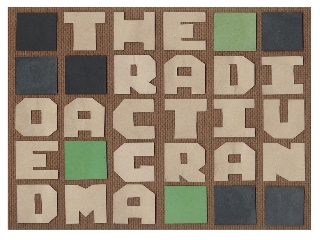 All songs written, recorded, mixed and produced by The Radioactive Grandma.

The Game- Harmony openers with soaring riffs and echo effects keep this catchy song in the back of your mind long after the seconds run out.

Don't Look Down- This is where the urgency comes in and a cultural intensity comes through. "Each and every step a small victory."

Another Wasted Line- A single from their album. This is a good sample of their overall songwriting ability and follow-through on the concepts they project with their music.

Chasing My Tail- One of my favorites on the album, the flow of it is vulnerable and strong.  "It goes on and on," as it should. This is where you look back at the album credits and count exactly how many people are in this band, because the instruments are layered with fantastic chords and sequences that run the song at an optimal level all the time.

Robot Song- Man vs.machine is the ultimate a question with this song writing team.

Waves- Smoother harmonies lead this and drive it into more layers of jam sessions. The vocals have a contemporary sound that will soon be timeless.

What Are You Running From- Upbeat tempo and change up guitars and vocals are a refreshing lift, with the lyrics are always questioning as the title reflects.

Fly With The Crows- High vocals with matching guitar works bellow out this skyscraper of a song.

Not Soon Enough- I am a big Cure fan, so yes, I hear the Morrisey influence in some of this guitar work. The round sound echoes float above the vocals, while the track is straight on as compared to the rest of the album, which adds variety.

The Walls Have Ears- Experimenting with sound, rockin hard and bringing it home, all the stops are pulled out with this song. If you listen long enough, there is distortion at the end that will slide into a fade out and return again with a secret track.

Radioactive Grandma debuts with a ten song CD that demonstrates the whole is greater than the sum of two guitars and a box. Check out their music for a fresh take on indie acoustic rock that pulls from a wide range of influences and keeps the style real.

Support Radioactive Grandma by buying their music: http://itunes.apple.com/ and Amazon