I came across Jason Anderson's music three years ago. My best music friend made me a mix tape of his favorite indie and pop songs for that year. I was driving from NYC to New England, and it started snowing along the NYS Thruway. On this January day, I was listening to the CD, track by track, when suddenly the opening riffs of Jason Anderson's, July 4, 2004 (From The Hopeful and The Unafraid) came on. The song's direct guitar work, descriptive imagery in the lyrics, and real to life story evolution was nothing like I'd ever heard. I kept replaying the song, bellowing loudly to "Oh Ja-son are you still wai-ting..." and "WHOA-Oh-Oh!" Three listens via repeat and I was skidding toward the guardrail ...

As soon as I got home, I looked for Jason's music. I was not on Facebook or the big social networks at the time, but sought out whatever I could find on the web. I downloaded, 'The Hopeful and The Unafraid, " and the CD that I made of it keeps getting lost because I carry it around with me to most places I travel. This prompted me to reach out to Jason for a interview, which you can read here, and gather the rest of his music collection, including this work of Summer Style. 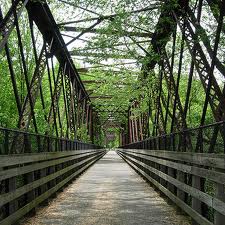 Jason told me during this correspondence that Summer Style was his "proudest work." There is a new EP called The Mark, which is more recent, but I had heard tracks from Summer Style last year and decided to review that first.

I asked him about the album art. The photo is of the Northampton bike path. I've roller bladed the Norwottuck Rail Trail more times than I can remember, but never quite caught the perspective that Jason reflected in this picture.

With Summer Style fresh in your mind at the core of the season here in New England, you can almost imagine yourself there, day after day, in such a beautiful place.

"I'm beginning to wonder ... I'm beginning to second guess ... the seeds of doubt have festered and sprouted bulbs of uncertainty ... they'll bloom into flowers of regret."

If you listen carefully to Anderson's lyrics, you will see an arc of progression to the full meaning of not only ideas, but developmental milestones. Harmony with his guitar and own voice adds layers of depth to the music, but creates an echo of back stories musically and metaphorically. This is in every Jason Anderson work. This is why I follow this artist so closely.

The use of local imagery brings you into the story. You walk along with Jason in his travels as the narratives unfold. He has been compared to Bruce Springsteen in many ways. I think Bruce's fast talking narratives, with breathy highlights of the eminent scenery, is a style that can't be copied in any real way. Jason Anderson has raw mindful version of this that comes through his own poetic sensibility and passion for every line, every note, everything that surrounds the music.

With a quiet entrance that has the feel of a post grunge rock ballad, Jason takes Subway into an indie acoustic walk through Brooklyn snow. His skill approaches the work of Bon Iver in the ethereal harmonies that echo in the background during the bridge.

If you follow Jason Anderson long enough, you'll notice that every album has a least one or two strong sing along songs. He takes his sing along-s very seriously.

In live footage, I've seen him time and again slow down the tempo to adjust the song to the crowd so even new comers to his music can catch on. He is the true pied piper of indie rock, bringing people along, while sharing stories that all can relate to. "Queen" is a snapshot of a rustic outdoor party with a lonely soul left out, "'maybe you can relate" he says, "well it's all night, waiting on a phone call ..." Who hasn't been in that situation? Now you have some company while you wait, or maybe you'll decide not to wait anymore and to just get out of your house.

This is my favorite song on the record. I love Jason's improv vocals, he has smooth lines flowing and then belts out an off note or line, that is just brilliant. "... and the neighbors are more concerned than intrigued ..." He quickly channels Bob Dylan in the tempo he takes on, then goes back to his own forms. Listen to this song, through its end - experience the edge - Jason escalates it to a great finish.

A working class rant, with the reality of day to day living is folded into a fast paced love song that runs the speed of a downtown Brooklyn train. Passionate acoustics, pounding the pavement and pulling out all of the stops, this track brings out all of the energy of the city and beyond.

Catchy and straightforward, Jason deals with life on its terms and then some. Up tempo, he keeps important questions light and accessible.

A little metronome with gentle strings brings this song into the room and you have to slow down and let this one sit with you for a while to really hear the first parts of it. He kicks up the intensity and breaks into a dual vocal with some background that fades and quickly stops on a dime.

Northampton, Massachusetts and the surrounding area, is a wonderful place to live, especially if you love music, quality music. We are not rock snobs, but there is so much great artistry that comes through the Pioneer Valley, we are just used to organically amazing musicians visiting our towns. Jason Anderson painted one portrait after another with this beautiful ballad about Northampton and perhaps Hampshire and Franklin Counties as well. When you get in your car and take a ride through the Valley, you will come across all that is mentioned here, restaurants, silos, corn stalks, Pearl Street, and of course, stars ... soul space ... and the wish to follow ... yes. At the end Jason screams, "Don't Be Afraid!" and loops around to "It's comin back to me" from the prior song. It fades out with some extended vibes which sound like an organ, but the noise is tense like summer bugs on a humid night. It just seemed fitting, given the title of the album and the whole atmosphere it creates.

Jason, we are following. THANK YOU.

Support your favorite artist, including Jason Anderson, by purchasing their music.

Jason's music can be found in many media outlets.
http://www.amazon.com/Jason-Anderson/e/B001LH8314/digital/ref=ntt_mp3_rdr?_encoding=UTF8 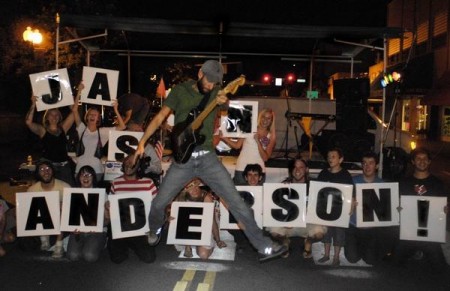