Underwater Sunshine is a timeless record that connects current and past music history through the favorite listens of the band. The Counting Crows are so skilled that they've made good song choices to evolve these tracks into their own. They've also challenged themselves and raised the bar a bit on some attempts, which is great for an experienced Counting Crows listener, and a fun jaunt for a newcomer. With tracks originally from The Faces, The Pure Prairie League, Gram Parsons, Bob Dylan, Big Star and others, this is a great addition to any acoustic rock fans' collection and an interesting walk down obscure memory lane for a record collector. ~Bluebird

The COUNTING CROWS are one of those bands you follow for the long haul. For those that first heard them opening for Bob Dylan long ago, or subbing for Van Morrison one memorable night at the Rock and Roll Hall of Fame, much of the soundtrack of our times comes from the Crows. Their vivid musical landscapes, as well as the feverish brilliance of singer/songwriter Adam Duritz. COUNTING CROWS hails from the San Francisco Bay area and consist of Adam Duritz (vocals), David Bryson (guitar), Charles Gillingham (keyboards), Dan Vickrey (guitar), Jim Bogios (drums), and Millard Powers (bass). COUNTING CROWS success dates back to their 1993 debut release August and Everything After and the hit single "Mr. Jones." The band recently hit #1 with the song "Accidentally In Love," which was featured on the Shrek 2 soundtrack, as well as nominations in 2005 for a Grammy Award, a Golden Globe Award, and an Academy Award for the track. COUNTING CROWS has sold over 20 million records worldwide.

From Their Press Team:

Underwater Sunshine is a testament of a band geek-obsessed with music. "There’s a million great songs written every day that you discover, and wish your friends could appreciate as much as you do," says singer/songwriter Adam Duritz. "These songs come from bands young and old, stretching from the early 60s to last year. They’re all great and will hopefully be heard by a few more people now."

Produced by Counting Crows and Shawn Dealey, Underwater Sunshine features tracks written by artists such as Big Star, Gram Parsons, Tender Mercies, Kasey Anderson and The Faces. Each rendition offers an entire spectrum of human emotion, delivered with the conviction and intense honesty the band is known for. As their first independent release, it was the right time for the Crows to make this album. "If you wonder why we didn’t just write our own record, it’s simply because we wanted to do THIS one," says Duritz, We now have the creative freedom to release albums like this and offer our fans more music than ever." 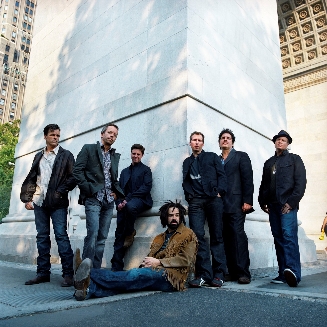 In Crows style, the opening guitar riffs have a warm rock vibe that pull you in and make you foot stomp as close to the Earth as you can get with the first note. This has all of the qualities that we've loved about the Counting Crows since they belted out the catchy, "Mr. Jones." Strong vocals, rockin guitar riffs, solos, great drum work and blended harmonies bring it all together, as always.

I love the piano invitation at the introduction of Start Again. Guitar acoustics and tempered percussion move the track along with comforting harmonies throughout. Open the car window and free your worried mind.

"Even though it's complicated, we've got time to start again ..."

My favorite song of the album. The honesty, validation of fear, comfort and wit that you'd need at a moment's notice, is projected straight into your brain with this riveting mega-gem sage runner. The guitar screetches disturbingly and almost flat-lines toward the end of the song. What a great effect! There is freedom in the message.

Originally recorded for the film, Georgia, "Mercy" is an uplifting classic, with a solid production and harmonies. Soaring guitar and soulful vocals carry the weight of the song to its rightful place. Rock goes to blues, and blues roots have gospel, the Counting Crows sing this from the rooftops, dare to bring it higher.

5. Meet On The Ledge (Fairport Convention)

Artistic wizardry meets southern warmth in this great arrangement. Deep in piano background, with guitar riffs floating toward the subjective experience of community, this could easily be a fan anthem. Let it come around full circle.

When I got the download of the Underwater Sunshine, the person who recommended it to me said it was , "beautiful." I think this is the song he was talking about. The slow progression, leading vocals, clear piano and gentle tempo changes highlight the meanings of the song. The Counting Crows chance time spent filling in for Van Morrison must have channeled something good. I recently interviewed Sean McNally from the Villains and he said, "loud things should be in contrast to quiet things," and to have patience with music - to let it happen. This is a clear example of years of music wisdom, played joyfully.

An updated version of this folk classic, it has a little more edge to it, but the charm remains. Adam Duritz' vocals are a bit vulnerable and the harmonies subtle. The accordion rocks!

Wit and rhythm that is slung down low, keeping up with quick vocals and change up paces, challenge the Counting Crows to take on a new sound. They nail it!

Rod Stewart's gruff voice is still in the back of my mind as I hear this, but it was really Ronnie Wood who sang this timeless original track for The Faces. Adam Duritz' youthful vocals bring the story into real time and the lyrics are easier to hear, with the underlying backups. The improvs make this track the Counting Crows' own. A tough act to follow, the Faces legend goes on, but with piano and tambourine precision, the Counting Crows pull this off with elegance.

Organ work, slow steamy guitar, walks us through, side by side, with shadows of satellites on a poetic journey. These are heady lyrics that need to be heard more than a few times to gather the story. But, then again, soulful songs such as this leave the white page blank for you to write your own.

You got any cowboy boots? Are they real boots? Not the fake fashion conscious kind, we want the rugged kind, that look better scuffed up and leave nothin left but the pale hide against the steel tips and heels.

Catch the winding, extended feedback mid-bridge from the guitar. It is wild and disoriented, much like the subject of the song. When you know you are in a difficult situation, but are still mysteriously torture driven to hold on, confusion, lack of logic, "a heart still at war" - After a while, you forget what it means to win or lose, you just keep singing from your soul. For some of life's questions, there are no answers.

A great big bottle of sunshine is waiting, which hints to the curious title of this album, Underwater Sunshine. One thing I know about the Counting Crows, they don't do anything by accident and have, in my view, never been market driven. Using symbolismn and double meaning lyrics, the light within the still water illuminates from the deep.

Tearing guitar, with a not yet country twang, starts off strong and is matched with equally solid vocals. Piano and underlying rhythms keep this marching on through the tempo changes in the vocals and arrangements, climb that hill, no matter how steep!!!

Alex Chilton still rattles in my mind since his passing. I did a review of the North Mississippi Allstars tribute album to blues piano legend, Jim Dickinson a few years back, and learned they worked together in some studio sessions. Westerberg's influence by Chilton and Big Star is so obvious the Replacements wrote a song about him, "I never travel far, without a little Big Star." The reach of Big Star is heard - light years away.

This to me, was the best for last. Rather than hash it out and analyze why it was so good, here is the live video:

Don't miss this song if you are buying downloads. I love album rock, because records are put together thoughtfully, with songs arranged in a certain order allow the listener a complete experience that is intended by the artists and producers. There is a vision of variation that is put together for a certain type of impact. While I am not against song by song downloads, I think if you can afford to buy the whole album from a band, go for it, because you may stumble across a song or connection that could have been missed in cherry picking each title.

New album available now!
Underwater Sunshine (or what we did on our summer vacation)