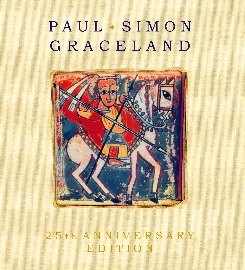 The long history of Paul Simon's music career continues. From Queens, NY, there is no other singer-songwriter like him. His warm smooth voice has been unique and recognizable since the 1950's. With his friend Art Garfunkel, they took on the music world at age 16. From note one in "Hey Schoolgirl," (1957), to the lyrical hymn, "Bridge Over Troubled Water," (1970), and the street anthem, "Me and Julio Down By The Schoolyard," Simon and Garfunkel became icons of folk-rock music world.

Simon went on to create a fascinating solo career, expanding on his folk sensibilities to other forms. One of his seminal works was the album, Graceland, where he integrated folk, rock and world music. His recording experience had already spanned the globe when he set to explore his vision for this album, but the journey he undertook to materialize it, seemed to help it evolve. The addition of South African music, resulting in Graceland (August 1986), made it his biggest-selling solo album and won Paul Simon an 'Album of the Year' Grammy.

The making of Graceland did not come without controversy. Due to the uproar from apartheid, Simon had to ensure the global public that he did not break cultural boycotts or support the South African government in any way, to collaborate with the South African artists who recorded with him. The success of the release brought financial benefits to the individuals who performed on the album. On, "All Around The World or The Myth of Fingeprints," Los Lobos is known to have appeared on the track, but the songwriting credits were debated. 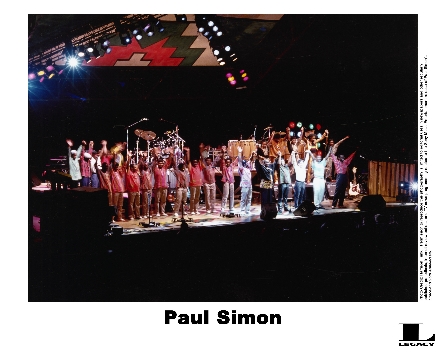 This album generated commentary on the original Graceland recording, from our contributing authors:

Carolyn Bryant, "Graceland, one of the finest contributions to music in my life time.There are and have been so many in the music industry with limited longevity, many for good reason. I think to fully appreciate the genius in Graceland, you need to examine that part of our music history. MTV was at its height of popularity and seemingly redefining public appeal with music. I think that the addition of "You Can Call Me Al," was another stroke of genius. It's a cute and catchy song and the perfect addition to provide the MTV audience with it's requisite video to provide notice of the release of Graceland."

"Apartheid was gaining world wide attention in the 80's. However, Paul Simon was not going to be one of those celebs that demonstrated his concerns "ala cause du jour," or rewind the sediments of the 60's. He is one that always comes to mind with what I like to refer to as, the "breaking of musical bread." Intelligence resonates thorough out this piece of work, it can continue to humble me today, as it did then."

I think the lyrics are very subtle, and make little, if any suggestion, of politics. He "broke bread" by sharing the international gift of music. It is refreshing to know that, we in the US mainstream, appreciate how much other cultures have to offer, musically.

"The Boy In The Bubble" video did not get much play on MTV, as I recall. Again, not a 60's, damn near hit you over the head message. It's subtle, puts it in somewhat of an abstract sense. His strongest suggestion to the pain of that plight was, "Don't Cry Baby, Don't Cry." It is a very avant-garde video, even for today.

Bluebird: What do you mean by 'breaking of bread' with respect to music?

Carolyn Bryant: I often use the term "Breaking of ..." to refer to those that dare to go outside of their known genres, such as Johnny Cash with Tom Petty, Robert Plant & Alison Krauss. I also use this term when, in the rare case, an artist is incorporating musical sounds from other countries. One of my highest esteemed list of examples of this would be Led Zeppelin's, "Kashmir," which they have continued to update over the years in live performances, to sound even more exotic. Sting's, "Desert Rose," comes to mind, too. 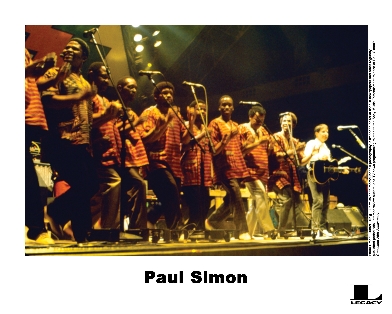 Decades later, critics have hailed Graceland as unparalleled, a work by which many other creative rock albums are compared. With an award winning record, so well received, why a re-release?

There are two reasons, I understood, as I walked through this history of Graceland and Paul Simon. Historical perspective and evolving creativity. This isn't the first time Simon has had his material re-visited.

"The Sound of Silence," originally released on the album, Wednesday Morning 3 AM, was re-recorded later to establish itself with more instruments and production. Once the vocals were brought out, it was a skyrocket number one hit. Re-releasing songs and records sometimes does have an impact on not only the new market it may capture, but most importantly, it gives the artists another chance to engage again, in the production to reflect another interpretation. 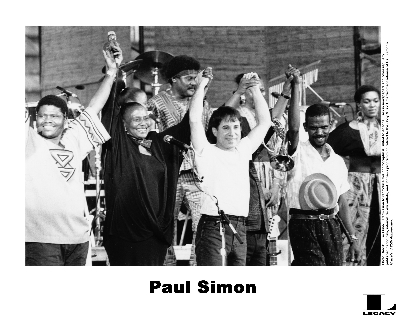 For Graceland, this album was re-released with added tracks, demos and an interview segment with Paul Simon. The original journey that Paul Simon took to add more world music to his singer-songwriter repertoire is explained by him and brings this music even closer to the heart. Simon's lyrics have always been in the context of his own life and his observations of the environment around him. Now we have a chance to pull apart the components of this, understand this and enjoy the whole of it, in a new way. 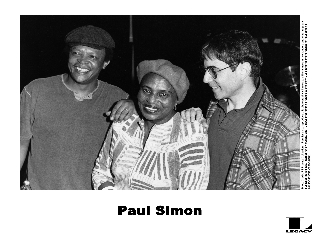 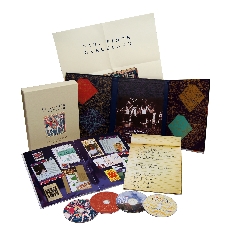 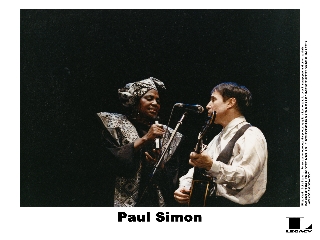 The accordion opens this song and album with bold percussion quickly joining in. A writer I coordinate with, in working on another site frequently says, 'Rock music ain't for sissies.' (Eastchapman). Vibrant imagery of soldiers holding their posts during wartime, flashes of protection, miracles and chance events are sent out in story segments. The song keeps moving along. Politics and underlying scandal is hinted to and quickly breezed by as moment by moment experiences of human beings in the desert, down to the last detail of the sand are honored.

The Everly Brothers sing harmony on this title track. Paul Simon said on the interview segment in this collector's set, that this song wasn't intended to be about Nashville at all, but this is what was in his head the whole time he was working out the production, so in the end, the lyrics had to follow. The drums reminded Simon of a song that might have come from a Sun Records production, so he used this genre to inspire the rest of the piece. The follow along humm of the instruments move along the journey with a country feel, but not like any other vibe we've heard so far. Personal stories and streams of consciousness rail through, but they are inclusive of the entire music collective.

Brilliant! Funk hammers you over the head, again and again. One listen, and you are hooked, even if you are toppled over by the ranting bridge vocals, you will not forget this song. Paul Simon's voice is smooth as glass, the speed in delivering avante guard lyrics increase the swank curiosity that draws you into the characters. Who else wants to go to the 'cinematographer's party'?

I have personal commentary about this song. My very hippie ballet teacher in college played this for us every week during warm ups. It had the back beat rhythm to keep, what could have been a very stiff and boring class of awkawrd beginners, moving. This year, upon reviewing this record, my 9 year old daughter took to the song with one listen, simply because of the vocals. It is a challenge for her to try and repeat them as fast as she can in the car. Pure joy!

It is said this song inspired the entire Graceland project. Coming from a track by the Boyoyo Boys, Paul Simon was documented to have written lyrics to sing over a re-recording of the song.

Blending world music with a NYC cab ride, what could be better? NYC was created by people of multiple cultures. Superhero themes even exist as the Gotham references ring, at least in my ear! The sax elevates the song. One of my favorite lines of wit is embedded without notice: Why don't we get together and call ourselves an institute?

5  Diamonds On The Soles Of Her Shoes/Joseph Shahalala, Paul Simon/ Paul Simon

Multiple works put together create a wealth of world music and non-stop rhythms, dealing with relationships in their most basic forms.

Linda Ronstadt sing in the second verse, and it is documented that Paul Simon wrote the song based on her childhood experiences. Rhythm guitar and bass percussion continue the mystery of the journey. Lyrics paint pictures. The roots of rhythm have been traced time and again. They will continue to be discovered, it is still just the beginning, 'ringing around my nursery door.'

Probably the most prolific of the entire collection. It proudly bellows so many sound ranges, with choral formality, sparked by spontaneity, surprise improvs are heard in the background if you listen closely. Blare it in your car on a hot summer day, or better yet, let it warm your Northern climate. Paul quietly leads this a capella orchestra, stepping aside to allow the brilliance to shine on through. Simon shows his smarts as a composer, putting his ego aside and doing what is best for the song.

Softer and more liquid than the demo, this piece bubbles up and I like it much better. "All about the fire of your life on the evening news." It is lyrics like this that set Paul Simon apart from other song writers and the swiftness of his casual delivery, when he is really saying something profound within 3 seconds.

Zydeco, Zydeco! Who else gets their family history told through contextual music?

The clash of the material and political world with the natural environment is what strikes me about this song. The drums lead into a great arrangement of world music, highlighted by rock guitar that keeps the song accessible to pop forms.

This is as soft and beautiful as "Scarborough Fair." It is sad, hopeful, gentle and soars with power all at the same time. Every time you listen to it, you will discover another voice, another instrument, another statement of presence, subtle, yet forces you to take notice.

The heavy bass remains, but harmony vocals are added to round out the higher ends of this sound. Paul Simon's voice is straightforward in the middle of the range, anchoring the song. As much as I enjoy this unreleased version, I found myself craving the bold voices that wrapped around the piece in its original release.They are only present at the very end. For collectors, it helps you appreciate the options and visions of Simon as the work evolved.

Rock and roll, 1980's style guitar, brings a pop form to the forefront without apology. Yet intelligent lyrics and an accordion work running under the whole piece elevate it to a classic.

Instrumentals from the original, scaled down versions, still a moving beat, though.

A fun summary of the instrumentals gives insight into this classic.

This is a mix of music clips and a full interview by Paul Simon on the history of the making of Graceland.

If you already have a copy of Graceland, this edition does provide more depth in understanding its production. A new listener would enjoy this collection as a stand out piece with which many other works have been compared.