Chris Ross is Halfway to Wonderland, however he defines it. With stated influences of Ray LaMontagne, this singer-songwriter from Maine is living his dream with every note that he sings, every lyric he writes. Dreamy love songs these are not, however. They are songs of love, but more of love that is defined in a broader sense. Love of country, dignity, family, sanity. There are some romantic love references, and these are honest descriptions, as close to the moment to moment breath, that love can be observed.

I heard contemporary singer-songwriter tones of the Counting Crows, Ray LaMontagne and even some classic soul influences in these tracks. In your face acoustics like Mumford and Sons make this an exciting contemporary take on folk music. Cool slides of blues guitar bring some Southern charm and history to the instrumentation. But the factor that sets Ross apart from other singer-songwriters today is his lyrics. These songs are thoughtfully laid out in precise narratives, where each word is a symbolic intervention as if in a poem. And the instruments are used to either describe, highlight or contrast the material being illustrated.

There is urgency as this album opens up. Ross' voice is indeed, velvet like Ray LaMontagne. Quickly he diverts to his own style, though, as Ross' vocals and lyrics are closer to what is happening in the moment to moment of his own thoughts. And then there are metaphors that he casually throws out, but really aren't casual at all. The metaphors he conjures up are symbolic images that stand for so much more. What he is saying to the subjects in the songs and the listeners are just beginnings of lessons in life that maybe he has learned or the rest of us should anticipate. More importantly, there is an honest acceptance of the imperfections in life and relationships. Ironically, this makes you feel that,  somehow, dealing straight on with the complex and bittersweet, you are exactly where you outta be.

This CD came in on a loan from a fellow writer, EastChapman. She caught Chris Ross' live show on July 4th, 2012, in Maine and has never been happier to sit in a hard chair at an outdoor festival to see a performance. She also reviewed The Steady Stumble, here on Bluebirdreviews. Within the week, I had these CD's at my door. For a biography on Chris Ross, read the reviews on his website. We had some brief correspondence, and what I love about working with him is that his story unfolds in the context of the moment of communication. So there is no glossy, one size fits all bio to cut and paste. In a world that runs on the information highway, Chris Ross is on his porch writing songs. 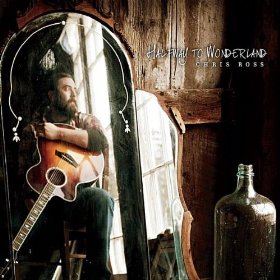 Recorded and Balanced by Ben Strano at The Hat Factory VI

All songs written by Chris Ross

"In the light there's a space in the place where you outta be ... " The pressure of the acoustics, headlines this multi-instrumental track. This keeps the anticipation of the story going. The landscape of the song changes, but the message to the subject and listener doesn't ever let up. "Running out of time, running out of moon and stars ..." He keeps the urgency constant and then circles around.  The running journey just keeps going, 'in the morning, maybe we can lay together like white lines, on the turnpike ...'  What a great choice for an opening track!

This has an upbeat, rhythmic tempo, which projects pure joy. The fiddle speaks of happiness. The lyrics tell a story that is entirely different: a puzzle, a riddle, swimming in the "could have beens" of love? But wait a minute ... What is life about anyway? Having all the answers may not really bring us the contentment we seek. "Maybe it's the plight of man, never just quite understand." Accepting what is real and facing the truth of any situation, maybe there is freedom in that? Seeing things for what they are and being honest with ourselves is sometimes more satisfying than trying to fit everything into little boxes. Chisel what you want to say to your front door, see what happens.

This might be my favorite track of the record. There is great production framing out the content here and it all blends together. The running back beat and steady drums is reminiscent of the great singer-songwriters of the 70's-80's. Back to the lyrics, Ross keeps up his realistic take on how complicated relationships are. This is sometimes the best thing to do - call out what it is that is happening and then leave it alone.

Hold back, the runners and the rap stars. What you sayin that folkers can't rhyme? The flowing hyperbole is exact and right on, makes you hit repeat. Burn the frivolous things.

This is a ramblin' drive down that dusty road of love with the windows down. Using irony as Ross often does, 'Fallin Apart' is not a bad thing, and signals the freedom of letting go, in the spirit of allowing yourself to experience facing another person.

This is a soulful track that would make Marvin Gaye or even Maxwell vibe to a groove. It is great to hear the range of styles that Ross can bring to the turntable.

A masterpiece. Listen to this song multiple times and hear the story of the life of a US solider. Then listen again and pick up the symbolism between the images, which he has built in - from the images. There are no politics in a fox hole. Ross takes the perspective directly from the human hero himself. His only agenda is for this story to be told. There are dreams that don't seem to want to die. Yes, reality sets into the scene, grief and sadness come through, but in taking small steps, the lives go on. Still, what happens to the dreams? Listen ...

Jack and Jill (From the Bottom of My Grave)

A movie plot in the making, Jack and Jill's story runs along, with the title of the album embedded into the lyrics. The sparse production give it a hometown feel and highlight Ross' voice as the main instrument. The guitar work reminds me of something Luther Dickinson would slide out for a blues piece, seeking the keys to the kingdom. The ending reflects the relationship to the gallows that often New Orleans blues writers refer to in their music. It is this break with fear of death that delivers the celebration of love and life.

I am both struck and refreshed, with recent singer songwriting men coming out to talk about trust and dishonesty. Kevin Bowe addresses this repeatedly in his new record Natchez Trace. The gut wrenching in admitting to the struggle, with facing the truth about deception speaks the unspeakable, which gives everyone the best place to start. Ross uses the least amount of production in this song. Keep it honest ... so you can hear the  ... "echos bouncing off the stars ..."

The crescendo and closing of this record is all about a dream. Don't forget the determination which drives us to keep hope and pace with the vision we may cook up to pursue. We are human beings with crazy hopes that things will work out. This is why we don't give up. It is the place of acceptance of the imperfect. There is power in the position of, we didn't quit, yet we didn't get fired...and sometimes the process makes the decision for us. "So perfect in the margins, so heavy on this desk."

Our hope, as observant reviewers, is that this is not the last last call of Chris Ross as a singer-songwriter, because he has brought us out from behind what clouds our visions to see and hear things clearly again. Using talented musicianship, eclectic productions within the singer-songwriter forms and deeply thoughtful lyrics, Halfway to Wonderland will have you not wanting to be anywhere else.