The Galactic Cowboy Orchestra: All Out of Peaches

This website was built on classic rock. We quickly learned, however, that you can't speak about any classic rock in depth until you understand the history of blues and folk music. Jazz and soul overlaps with these genres too and don't even get me started on the roots of funk. As blurred as the boundaries can be amongst these styles of music, each has a core sound that many experts can identify. I am not an expert on any form. I am a here to listen and learn, I write as I go. 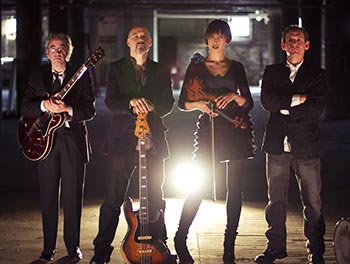 The best way to learn a new language is to immerse yourself in it, and that is my mission. This summer, I packed up my family and we spent our vacation time at the Newport's Folk and Jazz festivals. Upon return from this trip, I received this album, All Out Of Peaches, from The Galactic Cowboy Orchestra. Given that it was a product of New Folk Records, (2011) at first glance, I thought I'd be equipped to tackle this review. But after listening to the opening title track, it was like nothing I'd heard to date.

Categorizing this record is impossible, and that's a good thing. Casual noticing-s have started to amuse me at this point. Allmusic.com has it in the 'country' genre, while if I play the record through my iTunes, it calls it 'jazz.' It would make sense, however, that New Folk Recordings would take on this project, because folk seems to welcome the widest range of instrumentals possible, while keeping some core values of the music.

New Folk Bookings calls the Galactic Cowboy Orchestra, "Newgrass Art-Rock," so now we've got a hint toward blue-grass in the mix too. This is intriguing and definitely something to be explored. The performance arrangements are electric 4-piece, acoustic 4-piece and acoustic trio. 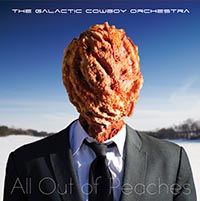 All Out of Peaches

This production was built for impact. When the hard copy arrived in the mail, the album cover itself was totally unexpected. The best way to understand this recording is to jump in and listen to it. Let it surprise you, shock you, challenge what you know about music and then listen some more. There is no doubt that this collection of people has cutting edge talent, both individually and as a group. The songs are well written enough to be naturally accessible, catchy even, but the creative razor sharp arrangements never let the listener get too comfortable. The recordings on this CD are not predictable even after several spins, which is the joy of it. It is this multi-genre mix of brilliant musicianship, yielding unexpected experiences, that also made this record perfect for the readers on our website. 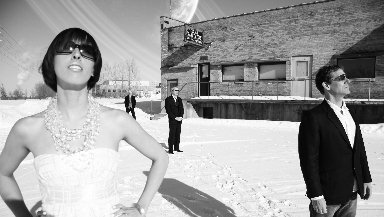 John Wright's steady bass would call up a tone of YES in any rockers memory. The guitar work of Dan Neale is reminiscent of YES as well and perhaps Rush, and the changes in tempo are a welcome throwback to the Moody Blues. Lisi Wright on fiddle, however, spins out the whole song into a different direction, while Mark O'Day on drums, well, he just makes it ROCK!

Ruby slips into the set here with a flash of Lisi Wright's solo violin work. The outer edge of the sound she creates is a piercing buzz which calls you to attention.

I don't listen to the radio much at all anymore, other than to check in on the pulse of the mainstream world. This song came up with some great instrumentals and pointed to a pop theme that I couldn't place, but a little research and it was indeed, Lady Gaga's Paparazzi (House of Gaga Publishing, Inc.) However, it has been completely transformed with the GCO signature and I think it's just genius! We had a reviewer last year document Jeff Beck playing a Gaga tune on his live tour.  To see artists from the widest range of forms share and improve on each other's work is very exciting! This is what we hope for as listeners, less competition and comparisons and more integration of interesting history with sound.

And pop forms I must say, do have some benefit to adding consistent rhythm for the listener. John Wright's bassline on this song, had some hints of a deep retro-mod funk sound that could be involved in a Thomas Dolby track. I ran this song by our readers and what I got back was 'RUSH' "YES" and a positive shout out from jazz fusion electric violinist Chris Devine (Birds of Flame), which is a big compliment, because the Birds of Flame re-create Mahavishnu Orchestra pieces just for fun.

Country warmth and charm begins this without question, Southern Rock from Lisi Wright's sunny fiddle to a "Ramblin Man" sound of Dan Neale's guitar. So where does the cajun come from? The underlying vibe of back beat that is created by the light fiddle mid-song, with the percussion, gutar rhythms also add some reggae heat.

I saw Lindsey Buckingham live this year for one reason, his magnificent guitar picking. What is going on with this level of guitar picking that has us so hooked? How do these musicians come out of the shadows with this incredible talent, when they are also doing other forms of music? I am just in awe of it and admire it so much. It takes a lot for me to keep up with the pace of it, but am always better to try. Bravo Dan Neale! This track is credited to Preston Reed on the liner notes.

Drums break out this record into a full on rock show with Lisi's fiddle to reign us back in. The percussion is so clear at one point it sounds like breaking glass.

This record is a progressive rocker's dream, and a classic rocker's trip to magic as well. The opening cymbals are similar to our favorite band, Black Country Communion, which offers Dream Theatre's Derek Sherinian with Jason Bonham on drums. This particular song has a lower bass mumble to it, which shows a darker side of the GCO. "Tom Sawyer" of Rush may hum in the back of our minds, but the core of this track is a unique blend of fusion and even some distortion that will blow through any common notions and move us to another level.

From "Fire On The Mountain," a standard that may just ignite your soul, if you don't have a bucket of ice around while listening to this version from the GCO. The Southern Rock influence of Allman comes through in Dan Neale's experience here, but it is funked out by John Wright's bass and there seems to be some call and response going on with Mark O'Day's drums and the rest of the musicians. These blues forms keep the listener engaged, no matter how loud the surrounding sound becomes. It is like a conversation of instruments! I asked Lisi Wright about the origins of this song and here is what she said,

"Fire on the Mountain, it’s actually a traditional bluegrass tune (here’s a version from Bill Monroe: http://www.youtube.com/watch?v=hOlJs3gObkg).    We added a YYZ-esque drum/bass break, which is one of my favorite parts of our version."

Jazz fusion with a softer blend of notes opens up this multi-faceted track. Neale puts forth almost singer-songwriter acoustics that float. The cymbal work from O'Day is beautiful and paves the way for Lisi's fiddle.

John Wright doesn't stay quiet for long, as his bass leads on this dimensional piece. It quickly builds into a great ensemble of twists, turns, blends and rhythms, with Lisi Wright's fiddle to highlight. The second part of the song offers some very hip distortion and a middle Eastern flair gives the whole experience an exotic feel. I wonder if Genesis would be playing music like this, had they recorded together a little while longer. The stepwise levels brings us up to crescendo with Neale's guitar and Lisi Wright's fiddle again, but never lets go of the warm vibe of the bass, while the drums just rock on. Great song!

So there you have it, I set out to review a New-grass Art-Rock record, thinking I would be writing about folk music and I end up pulling from classic rock!

As Ahmet Ertegun says, "It is a great life, this life of music~"

Dan Neale – Guitar – Dan Neale is one of the Twin Cities’ most adored pickers. He has played with Bo Diddley and has performed as a guest artist and a fill in for Pat Donohue on Garrison Keillor’s "A Prairie Home Companion." He also performed with Chuck Leavell (keyboard player, The Rolling Stones), Hutch Hutchinson (bass player, Bonnie Raitt) and Kenny Arnoff (drummer, John Mellencamp) in the 50th Anniversary Buddy Holly Tribute, backing such greats as Graham Nash and Wanda Jackson.