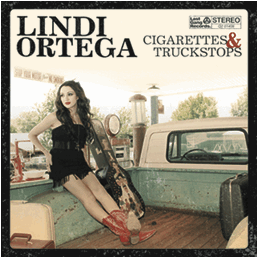 Lindi Ortega made the trip from Toronto to Nashville, TN, with a Hank Williams influence and a great producer, Colin Linden. This record uses gentle depth in the production that expands the soul. With Mexican/Irish roots, Ortega's voice is soft and clear, with just enough twang to be called country. I'm trying to decide if she's got some blue-eyed soul in her. Full of breath and warmth, her vocals are precise.

Inspired by an interest in the blues on early country music, the musicianship is clearly a throwback to that time. You can hear the instruments so clearly, it is a joy to follow each song through crescendo to end. This is her second album, after her JUNO award nominated record, Little Red Boots, and the material she deals with in Cigarettes and Truck Stops, yields straight on blues topics; struggle, travel, life, death and, of course, the cross roads and the after-life.  Much like the courage of Patti Griffin, she boldly announces who she is to her audience. She has been acclaimed to sound like Emmylou Harris, but certainly is bringing her own style into the genre.

"Cigarettes and Truckstops" the title track had a sweet vintage sound, maybe a reminder that Patsy Cline is still out there somewhere, while "Don't Want To Hear It" had a soul mover rollick much like Bonnie Raitt or blues singer, Beth Hart. "Demons Don't Get Me Down" is straight on piano bar, dusty country, juke joint music. "Murder of Crows" is a deep cut of blues with the opening guitar and Ortega takes you on a ride. She brings mystique into the record with this storytelling ballad. "Heaven Has No Vacancy" is piercing. "Every Mile Of The Ride" is airy and open, a wonderful way to end this classic record.

Cigarettes and Truckstops is recommended not only for country music collectors, but music fans in general, who want a record that pulls from the roots into modern times.

Cigarettes & Truck Stops was largely inspired by Ortega's move to Nashville from her hometown, Toronto, which brought her closer to the origins of many of her influences, including Hank Williams. By reading a biography of Williams, Ortega discovered his mentor Rufus "Tee-Tot" Payne, the street performer who taught Williams to play guitar. This sparked Ortega's interest in the influence of blues on early country—a fascination that comes through strongly on the record. Ortega brought on praised producer and T-Bone Burnett musician, Colin Linden (O Brother Where Art Thou, Lucinda Williams, Bruce Cockburn) for the project when she found that he shared her interest in blues and the roots of country music.

We are fan based, here for the music!