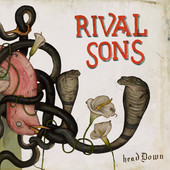 Rival Sons is an LA band, bringing a non-stop, rock-n-roll experience - oozing with slink, grit and attitude. When Rival Sons opened for Evanescence on October 28, 2011, my first reaction was, "...This band ROCKS!" To say I was impressed is an understatement- I had to hear more from them. I put my hands on the CD, Pressure and Time, and found the music steeped in rich soul and swampy blues.  Fusing shades of The Doors, Led Zeppelin, The Beatles and Creedence Clearwater Revival, the CD spun with a vintage sound from the late 60's/early 70's that was filled with unbridled energy.  Rival Sons entrenched their style with a rowdy bold swagger. Pressure and Time is fresh, exhilarating and all attitude.

The only thing missing from Head Down are the daisies, lava lamps and heady patchouli, but if you close your eyes and listen – it's all there – along with peace symbols, bell bottoms and long hair.  Head Down by Rival Sons is psychedelic, head-bopping blues, infused with foot-tapping, body-rocking soul and slicked back with in your face, fist-pumping rock. Jay Buchanan, Scott Holiday, Mike Miley and Robin Everhart are the quartet that is Rival Sons.   For the past year and a half they have been on the road strutting and playing their music, teaching audiences how to groove and doing it with swagger. They opened for goth rockers, Evanescence, then embarked on their own headlining tour of Europe.  In 2011, i-Tunes named them "Best New Act" and just recently (11-13-2012) they were awarded, "Best New Breakthrough Artist of 2012" by Classic Rock Magazine.

Compared widely to Led Zeppelin, Rival Sons got a chance to hob-nob with guitar great, Jimmy Page, who was in attendance at one of their shows in London.  Even the music elite know an amazing group when they see it. Getting a musical nod from Jimmy Page must've been both humbling and euphoric.

Jay Buchanan's voice exudes confidence, something rarely seen in bands today.  His vocal prowess rivals that of the great singers:  Plant, Morrison, Mercury and Rodgers.  Jay is the epitome of what a young, rock god should be. Scott Holiday, is a serious, dedicated guitarist who's playing is electrifying.  He's not Page, Beck, Clapton or Hendrix – he's Holiday.  Scott takes from the masters and puts his spin on it. Yes, some similarities are there, but there are no blatant rip-offs. Scott's ability to shred and make notes scream is readily apparent as is his softer, acoustic side. He's tight but loose. Mike Miley and Robin Everhart hold the rhythm section together and are the battering ram when needed.  Mike's heavy-hitting beat, and the playful ease at the drums, is amazing.  He makes it all look easy, though we know it's not.  Robin's playing is steady, and the glue that holds the Rival Sons sound in sync. Timing is everything - Mike and Robin nail it.

Head Down is a scintillating, smattering of melodious, cacophony of songs. Rival Sons is, hands down, The Best New Act/Artist for sure.  This album is a necessity for your music collection, and when the Sons roll into your town - GO SEE THEM. This is a band that you "must" see live to truly experience the music.  They are THAT good!

Sample and Purchase Head Down on iTunes here. 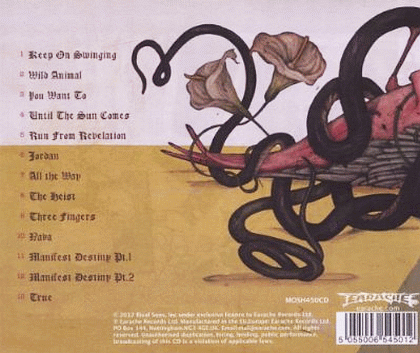