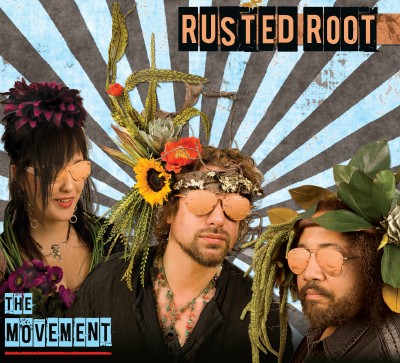 Produced and Engineered by Michael Glabicki.

1. Monkey Pants
"This album is for the fans." "Monkey Pants" is instantly infectious, disables your editor, and really does make you dance with animal like instincts. It is a celebration of our collective human condition. This lead track is the perfect sample of what the record will bring. Fun, cheerful, connectedness, not only to the music, but to the fans. Singing directly to the audience from the stage, the band extends a global invitation to a world party. Once inside, Rusted Root takes this album back to its earlier works by re-introducing raw tribal arrangements, great use of space shifter techniques, and knock out vocal harmonies.

2. Cover Me Up
The opening beats bubble up like water, you can hear it sparkle. A journey down the road to where-ever your soul wants to go, with interesting twists in sound, Rusted Root creates a contemporary space for the warm beats to live and grow. Glabicki's guitar keeps it rock, while the harmony vocals with Liz Berlin start up a community. Beautiful guitar and percussion time each other, as the vibe pulls from Calypso and African horizons. Glabicki shares, "The guitar work on this song is really extraordinary, Colter Harper's parts are beautifully layered with mine, his many trips to Africa really show through on this song."

3. The Movement
The title track brings a lower, more serious tone, and a focus on the percussion team. This is what Rusted Root is all about. Watching the footage of Rusted Root open up for Plant/Page, I can understand why this band supported their tour. The innovative sounds extend a wide reach and challenge the listeners. Robert Plant's solo work has used international talent and experimentation, while Jimmy Page has traveled the world for varied techniques to be explored in music.

"Our drummer, Preach Freedom came up with such an interesting drum pattern for the song and along with the tambourines, foot stomps and claps, it's like nothing I've ever heard before," exclaims Glabicki.  "It was really great having Lucy Stone singing background vocals with us on this one.  She came up with a couple harmony ideas that I worked off of to create the vocal arrangement for the song, it feels like exciting new territory for us."

Strange and curious, with true tribal free forms that morph and fade, "In Our Sun" uses time and space for effect. Bells and mumbled vocals create an artistic hush. The percussions rule, bringing the listener through various levels of awareness, with harmonies floating, pulsating, to the forefront. This is beautiful, like nothing I've heard outside of Passion Sources by Peter Gabriel or Kronos Quartet. The Afro-Celtic Sound System produced some wild mixes of world music. Rusted Root keeps this all accessible.

Glabicki explains the song "In Our Sun" started out as an experiment and was created with several great Pittsburgh drummers. He was playing around with the song and started listening to it backwards; that's where the fun began. "There's an acoustic guitar that was used solely to record the drums through its magnetic pick up which caused the strings to ring out creating a drone effect which decided the key for the song. Since most of the vocals were then recorded on the tour bus you can hear the bus humming and rattling throughout the song too."

5. Fossil Man
Acoustic balladry comes on slowly, vocals are core quality that simmers. The song is about moving on and leaving 'this all behind'. This is so hard for human beings to do, in the midst of something so beautiful. Bring on the spaceship, if we have to leave, let it be spectacular.

6. Fortunate Freaks
Funk fun calls you out. Rusted Root has been around long enough to know who you are and where you are hiding. I love the production of this record, because you can hear the subtle arrangements in each track. The cymbals really crash, pedals thump and harmonies rock. The mix of soft and skat is a reflection of the diversity they are embracing. The fan name support system to produce this record was called, "Fortunate Freaks." Let your freak flag fly!

This song, as well as "Monkey Pants," are my top picks from the record, for different reasons. From word one, in "Sun and Magic," I heard stories unfold and Fleetwood Mac type majesty at work. Moment to moment visuals are present, and then beautiful lyrics of questioning love, life and its very essence, float over the skies as clouds for us to watch - or join.

The bridge is a union of chanting, strengthening, the claps, change-ups and frolicking fun, with tambourines, acoustics.

"All I can do right now, is control my own mind, cause it's not a believers world, you gotta go out and find it ..."

8. Up and All Around

High bells, funk and gritty guitar made this track a hidden gem. Rock and jam is sweet. Bass lines move this along for a fast pace.

Steady sticks march, with a fife and drum beat. The guitar comes in and vocals take it slow with a contemplative song to close the recorded song list. The last note from Glabicki is worth a listen to the whole song. He aches, vacillates, between letting go and admitting he's "all alone, thinking of my desert flower." The only critique I have of the song is that Bluebirds don't lie. This is a great album, we call it as we hear it. Ramble on.

Bassist and vocalist Patrick Norman says, "From the very first time we played music together, I knew we had something special. The music and the enjoyment of creating and playing with one another I feel is the driving force behind this band."  Liz Berlin explains that the members of Rusted Root are drawn to and have explored virtually every form of music. "I am very inspired vocally by anything from Indian to African to Middle Eastern sounds and scales having grown up with a lot of Hebrew music" she says. Michael Glabicki's cites the Bee Gees, Elvis Costello, Neil Young, Tony Childs, Black Keys, Black Sabbath and various Afro Pop music as among his influences.