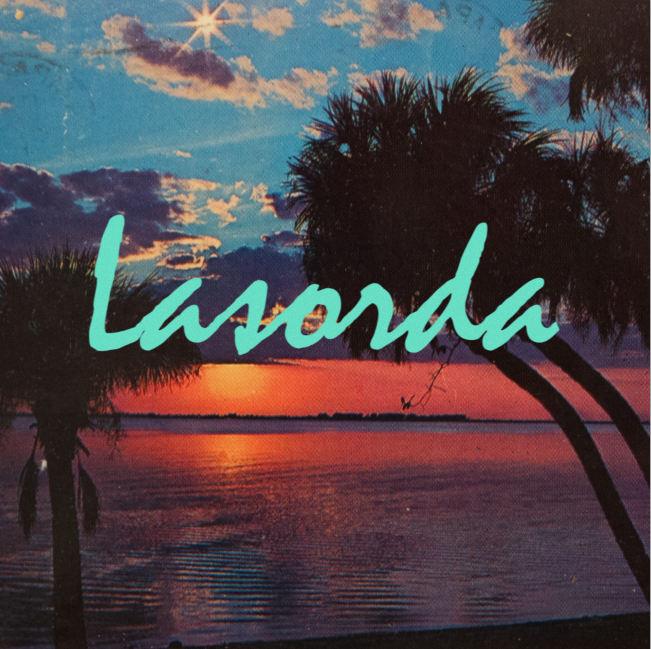 Lasorda (featuring members of The Get Up Kids, fun., The New Amsterdams, Kevin Devine and The Goddamn Band, and Ghosty) are currently streaming a new song. "Sleep When You Are Dead" is featured on the band's self-titled debut album, available on 12/11 and available now for pre-order through Clifton Motel, iTunes, and Amazon .

This album is different than the acoustic works of Matt Pryor's solo project  we reviewed earlier this year. Lasorda worked hard to distinguish this debut album  from their bands of origin. Dual vocals with Matt Pryor and Suzannah Johannes add depth to the entire record. Matt's warm, naturally broodingly raw voice becomes a foundational counterpart to the ever-airborne Suzannah mystique. The times of The Sundays, The Cranberries or even the second wave of the 10,000 Maniacs, (post Natalie Merchant, with Mary Ramsey) were not far from my mind. This record is not about the past though, and the sounds are very different.

"The Age of Wonder" opens and Suzannah Johannes' vocals are airy, light - echoing into a chamber, that could have been built by Nick Drake or Bon Iver. "Interlaid" sounds unabashedly retro, with radical pop synths that are upbeat and smooth. Jazzy is "Basque On The Borderline," with some catchy lyrics that stay with you, as you move through the rest of the album. "Fivefivefourtwo," which is heavy on the synths and pops, literally pops in the beginning, making it major techno to start. But the guitar that comes in three quarters of the way through the song, glues your brain back together. The vocals "fit" the arrangements, an effort to create some technical interest with smooth harmonies.

Suzannah has a soft version of Edie Brickell going on with "Is There Anymore To Lose." Special effects mid-song reflect the theme. Lasorda gets a lot done in a few short electronic minutes. The transition to "No Intent To Return" is seamless with leading drumbeats that pulsate into another floating idea that turns out to be a storm of a song surge. This piece, quite sublime, was my favorite meditative focus on the album. There was something about it that pulled me into the story, or encouraged me to create my own. This track is streamed exclusively on Absolute Punk.

"From the wise to the absurd" "Of Little Faith" goes from whisper quiet to blaring metal loud, with drum echo effects. The guitar's highlight of the vocals, underlining, reigned the unstructured nature of the song in and made it rock. Driving music comes through with flying beats and great mixes in "Echo In The Night." I liked the phrasing on the lyrics, they are positive and purposeful, instilling hope and confidence. On "Sleep When You Are Dead" Matt Pryor's vocals push it out, but I wish they were a bit louder. I think this would be very intense to watch live. Clever, inviting concepts of how to get the bad news in any way that you can, gives up a punk type of vibe with "Go On, Give Me The Bad News." Suzannah's voice and the high pitched synths create expanse, which is grounded by the entrance of guitar pieces. Bass laden steadies out the whole track as it marches to a close with duos to bring it on home.

Lasorda is being billed around the web as an "indie supergroup." Given the experience of each member, rather than show off, they settle down and write what they want. The vocals show musical interest and creativity, with duo effects adding dramatic contrast.  You can hear the influences of the run-ons from the Goddamn Band or the guitar work of The New Amsterdams, and the introspection of Ghosty. The songs blend together effortlessly, to accompany any activity, such as driving or meditative work.  Overall, this album is forward moving, but I heard some retro forms too. Sometimes the lyrics are hard to hear over some of the heavier productions. This may have been done for effect or was just a product of my listening. Still, there are stories being told or to be told. Lasorda brings you in and gives you a pen.

ABOUT LASORDA
A radically new venture for the members of this eclectic group, Lasorda effortlessly blends elements of brooding pop and synth-backed melodies, topped off with a duo of smooth vocals. No strangers to the music scene, this veritable powerhouse of electronic indie rock includes Suzannah Johannes, Matt Pryor (The Get Up Kids, The New Amsterdams), Nate Harold (fun., Koufax, The Honorary Title, Waking Ashland), Dustin Kinsey (The New Amsterdams, White Whale, Higher Burning Fire), Mike Strandberg (Kevin Devine and the Goddamn Band, Brian Bonz and the Major Crimes), and Josh Adams (Ghosty).