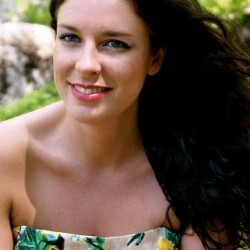 Maine's Stesha Cano has taken the local scene by storm, swarming the hearts and minds of live music fans with her debut album, "Like a Bee." Backed by vocalist Amy Briggs and an eight piece band, this album spans the sounds of jazz, soul, blues and swamp-y swing cabaret music. With honest lyrics that tell story after story of discovering deceit, heartache, heartbreak and personal triumph, the listener is pulled in to real life scenarios, which are handled with grace. Using visual lyrics that create emotions within the audience on the first listens, "Like a Bee" is a walk through nature's garden, complete with scratches from thorns and near miss stings. The band and arrangements wrap sunlight around the words on Stesha's page, streaming in various productions that reflect the mood of each song, projecting its raw beauty.

Jazz bass lines from Phil Kell create a sophisticated groove and Stesha Cano comes onto the music scene with bold courage and a wide range in her vocals. Her voice reminds me of Shawn Colvin, but with a deeper tone and faster pace. She is more jazz and blue eyed soul than rock, with command over the arrangements that are multi-layered, multi-instrumentals. Horn arrangement, trombone, sax elevate the album, (Jim Winters, Shane Ellis, Brian Nadeau).  "Take it South!"

Brian Catell on piano opens a sad, intense story. How many times has love turned and floated in a direction that we did not expect. Stesha, with all original tracks on this album, shows the ability to articulate what often can't be said in words. Andrew Clifford and Mike Bennett bring up the tempo with world music percussion that keeps the track light and contemporary.

This is beautiful, but not even close to a sleepy dreamy sap filled seance that such a title might imply. This is a strong message of reassurance when love needs to exist across time and space. The guitar, vocals and steady drums carry the torch.

Contemporary cabaret style in your face is fun, while jazzy Stesha confronts the lying, cheating, stealing scoundrel with style. Her voice reminded me of a jump blues version of Basia. Stesha belts it out, whoever did her wrong better run.

Brian Cattell introduced a Rhodes to the album with this track. This is low down and toned, to deliver a plummetingly serious message. The bridge has a great smooth retro vibe.

This is a shining star among the beautiful constellation seen in this record. It is a running, humming commentary with an inviting jazz pull. Stesha's voice is smooth, and clear as the glass of which she sings. The production is perfect for her delivery and remains elegant.

The title track brought a lot of production and layers of instruments. It stood up to the expectations and put Stesha Cano into the realm of women stand up survivors. Confident, level headed and aiming to let go, she is an example of how self-validation faces adversity, without escalating the situation.

This slithering, slinking, song shows how Stesha can create visceral images with her words and arrangements that seek you out, telling you the story that you won't forget. I hate snakes, and wow, does she push the metaphor on this track. A reggae beat mixed with contemporary jazz and some Destiny's Child wit brings it. Well done, I wouldn't want to be the subject of this song.

Adam and Eve's story is retold with a twist from Stesha Cano. Smoldering metaphors that cast light on deceit are paralleled with understated arrangements and low range backups, highlighting Stesha's angelic voice.

This was my father's favorite tree. It was hard to maintain, the leaves and sporadic growth. But its beauty was unparalleled. Stesha has a conversation and befriends a weeping willow in this song. Her response to the kind tree is raw and honest. She bids the willow not to weep, reassures, it will not be lonely. A beautiful way to close the album.