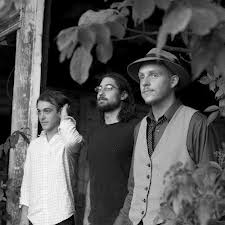 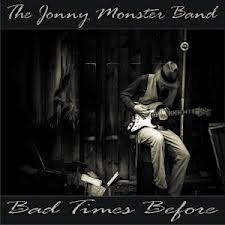 The second album from blues jammers, Jonny Monster Band, Bad Times Before, is a more rock than the raw blues they rolled out with their self titled, debut album (which we loved).

Influenced by Johnny Winters, Hendrix with rhythmic faster paced riffs and licks, it could fit right in with an SRV follower's collection. And it's got enough rock to have a "Bad To The Bone" Thorogood vibe. The vocals rang in a bit of Paul Rogers as Monster is smoother. The slides on "It's My Own Way" are great and a tribute to blues rock everywhere. Changing up each song with fresh arrangements, the high sticks drums matter, "It's Been So Long" brings it on home with some swank that gets to the point. "Anyway You Want It" has a dreamy, acoustic, "White Summer" (Page) feel. But Jonny Monster makes the sound all his own by his rough whiskey vocals. The tapping, scratching, realness of the production is a live sound that brings you into the real. "I Ain't Gonna Lie" cranks out a high flying riff that underlines a party anthem, down low grinding blends keeps the blues tones heavy on the rock end. "Dreambats" offers warm instrumental ballad tones and slows down the whole process, showing off a thoughtful side of the band, without giving up the creative edges. There's a slow hand Clapton vibe going on that's just real nice for anything you're doing at the moment (including writing music reviews). Mid-set on the record, it gives the listeners a different kind of experience to take in all they've heard so far. I reviewed Omar and The Howlers for the Boston Blues Society and the spirit that Jonny Monster brings to the party is something that is just beginning with this up and coming blues band. "Instead of Hello" nails it with front line vocals, straight on production, timing and overall world boogie. "77 Cornell St. Blues" slows it all down,bringing some acoustics on board to walk beside the storyteller's tale. The black dog of the blues, that keeps us company on the way to the crossroads can't be understated.

The title track, "Bad Times Before," sweeps into the scene, huddled back into the 8th position of the record, but keeps moving to the front of the mix. It's real honest music, puts the hurtin kind in their place, and then moves on with grit and persistence.  A well done solo that includes the whole band keeps the instrumental pieces engaging without being over-indulgent.  "Ain't Going Back" has a similar theme.

"Human Nature" was a big surprise to hear toward the end of this album. Monster takes risks with the acoustic ballads on this collection by coming out of the jam zone, and that's all right.

The Jonny Monster Band is already a local staple for quality blues rock in the Hudson Valley and beyond. They are not squandering their good reputation, however. Keeping their heads down and aiming to continue authentic quality recordings, they are a hard working band with a solid focus. This new album is slightly different than their first record, with some acoustic risks and ballad vocals. Change is good to see in any band, as they keep their foundation of rockin party blues, but add life perspective and stories from the road.

The Jonny Monster Band is a rock n'blues power trio from New Paltz, NY. Featuring Jonny Monster on guitar & vocals, Pete Newman on bass, and Roger LaRochelle on drums. Known for their fast take on the blues they are the newest addition to the Cracker Swamp Productions family out of Orlando, FL. The release of their debut album in January of 2011, freshly pressed split record with deep roots blues player Husky Burnette, and second full length album "Bad Times Before" has marked them a staple in the blues scene of their area and others. The band's fresh take on rock n' blues has been heard at such memorable shows & events as The Rosendale Street Festival 2008/2011, 2011/2012 Blues Brews and BBQ and The Stepping Stone Blues Festival in Havre De Grace, MD. They have had the pleasure of opening for Jefferson Starship and the legendary guitarist Johnny Winter at The Bearsville Theater in Woodstock, NY as well as headlining their own shows at such places as The Bitter End, and Arlene's Grocery, New York, NY, Club Helsinki, Hudson, NY, The Oneonta Theater, Oneonta, NY,  and The Beale St Taproom, Memphis, TN. Jonny Monster's high-energy aggressive guitar style captivates audiences and puts the band at the head of the future of rock n' blues music as well as making them a must see live act.