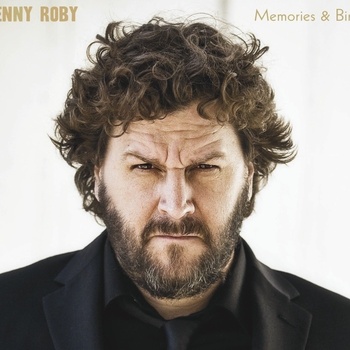 "Words come easy to a fool

after all they're just words

And only descriptive tools for memories and birds."  ~Kenny Roby, Memories and Birds (2013).

North Carolina based singer-songwriter Kenny Roby (6 String Drag) brings poetic art to well produced, stand alone, music pieces, in his new record, Memories and Birds. The list of contributing artists and number of well appointed instruments is noteworthy here, although Roby gets a lot of press for his very unique lyrics. Influenced by Randy Newman and Townes Van Zant, the philosophy that words in music don't always have to be upbeat, gives him permission to tell stories as dark and twisted as a T.S. Eliot meets Falkner poem. However, the score that flows behind the pieces is warm and inviting. The listener is held steady, as the imagery changes.

This 8 track collection is a monument of eclectic relativism, that expands as it plays. Each song is unique in its own right, but Roby's style comes through. The lyrics, honest and sometimes stark, also come around with a subtle moral of the story, that is positive and humane.

"Memories & Birds" was recorded between December 2011 and April 2012. Themes of Faulkner, O'Connor, Percy and McCarthy are noted as influence. I heard a range as wide as Tom Waits and Elvis Costello, but these artists are not that far from each other in conjuring up provocative subject lines. Where Kenny Roby stands out is the consistent honor of the lone soul, participant observer and quiet societal commentator.

Normally, when I hear a new record, I listen to it casually, then specifically pull it apart, to examine the various components that created 'that' sound. Back and forth between the meta-cognition and microcosm of timing versus chords, I try to understand how and why these artists produced their songs. With Memories and Birds, however, I found myself just listening to the music and observing what was around me at the time in a different way. The record's slow paced and technical production, becomes your own personal sound track, providing a new perspective of whatever you are doing in the moment.

"I sat there upon a rock that wasn't very tall, And the thought of fallin' off was harder than the fall."

There is awareness and vulnerable strength, in realizing that the idea of what you fear is worse than the event itself.

A worthy title track and straightforwardly put right out front. Even the promo video is intriguing. From the tinny opening, which expands with warm greetings to the blends of varied keys, echo effects and subtle harmonies, there is more to this song than what is stated or heard at first glance.

Catchy and engaging, lighthearted is the fantastic story. The Monster brings you in. Until the reality opinion is said, Roby insists, "don't let it die here." Again, a resilient theme, hidden in the monster image,"the fear of attack is harder than the act."

3. The Craziest Kid In Town

I have a fear of snakes, but Roby may have moved me enough to cure it. I actually felt sad to know that the snake died in this song. Mistaking road lights for a sunrise, is like mistaking an airplane for shooting stars. The snake knew there was something wrong. But we have to survive the error, even to make fake wishes. The snake did not survive and the boy was shaken.

I found that this was a song about loss, not only by death, but observance of the loss in other's lives too. Roby brings in family issues, relationships, religous metaphors and natural processes to create a swirl of images and feelings dealing with life change and missed intuitions. I watched a few videos of Roby live, in one, he talked about the craziest kid around 'growing up'. I have a theory that we revisit our adolescence when we've had enough significant losses.

Perhaps one of the darkest tracks of the set, "Colorado" is also the slowest. It has a monotone from Roby, with strings so tense that you feel the pain of the "disabled orphan girl." Douglas' flute brings some innocent commentary to the work, while Markano's atrium-like quality on the viola and violin, make the song something that would be intriguing to see live.

5. Tired Of Being In Love

Douglas manages to create the high brass Motown sound for this long lost loveless marriage ballad without being too kitschy. The percussion by Hampden, McCall and Kim in other songs, has been a solid fit for Roby's intentions, as well as the genre they are tapping in to at the time for each song. Motown percussions are a tough balance to create and they've done it by blending enough of Markano's strings with the rest of the percussion team to pull this off, while still keeping in the serious tone of the album. Ain't nothing like the real thing, baby! (Marvin Gaye).

While the title track may be one of my favorite songs here, this one comes in close. Roby's team of guitar pickers is treading on blues territory. The slow tempo still moves up and down with a "whole" sound. The slow core baritone effects are right on with Robert Plant's Band of Joy current work, or back to a Plant/Page Clarksdale track. But modern tones like Jim White aren't too far behind in my thoughts, either. Still, we know that blues are older than this, so we'll dig even deeper and find some Johnny Cash or Hank Williams to bring the up the history as we should.

I can't say enough about the variation in instruments, song by song, on this record. The core of this production team and the musicians have thought out every detail of how each musical arrangement will reflect the lyrics, the story, the message.

I reviewed a Matt Pryor (Get Up Kids) record in 2011 and another project of his last year (Lasorda). I still have a theory that musicians with punk experience make great acoustic ballad writers. They keep the rhythmic edge of their music, but then just say it like it is, so there is always a contrast.

I drove from Western Massachusetts to Cambridge to see Kevin Bowe and The Okemah Prophets earlier this week. I was tired and not feeling well, so I took Route 2 through the Mohawk Trail, avoiding highway and Boston traffic. These local roads mid-March are grey, frost heave laden, with remnants of Winter leaving the area stark. It will be a solid month before the buds of Spring dawn the trees here, and an April snowstorm is not a shocker in New England.

Listening to Kenny Roby during this trip, I watched the nearby rivers flow a bit more slowly, rhythmically. Matt Douglas' clarinet floated over the opening, title track of Memories and Birds, while Josh Starmer's cello kept the tones grounded. As the houses flew by the old broken down tractors and trailers in people's back yards seemed to have a beauty to them, that I'd never noticed before. They were like iconic photos of regional locales, carefree and honest to live their lives outside of the Better Homes and Gardens or Yankee Magazine snow-globes. Much to my surprise, this consistent scene of blue tarp-ed wood piles, add on sheds that slanted in the slope of the ground settling near the Deerfield River front views, and hand painted shutters on generational houses, turned up a smile in me, because my new awareness let me notice that one family along this path had dozens of plastic pink flamingos on their front yard. It is this leveling of reality that opens up the mind to small joyful surprises in life. Kenny Toby does this with his record, Memories and Birds.

Kenny was the frontman for the Raleigh, North Carolina-based band, 6 String Drag, who were part of the first wave of the alt-country movement in the '90s, coming up alongside Whiskeytown, Drive By Truckers, Son Volt, etc. They were signed and produced by Steve Earle and had a great run before eventually splitting up. Since then he's released a string of amazing solo recordings. This latest, 'Memories & Birds,' is his fourth to date and his first in over six years.