THE REAL: Another First Step

THE REAL: Another First Step

Toronto rock band, THE REAL have been playing live shows and running EP's for quite some time now. There is a loyal following of this band for good reason. They take their songs and improve on them, rather than cranking out more, it is quality over quantity.

For example, the song, "Becks" has been on the web for well over two years. I've heard both live and recorded versions played with focus, and each take gets tighter and tighter.

I was thrilled when THE REAL (finally!) put their songs on hard copy with their new CD, Another First Step. It arrived beautifully wrapped and SIGNED by every band member (thank you!) This ten track collection spans the range of 90's grunge rock, acoustic ballads, classic 70's jams and techno productions. Does this contradict what I've said earlier about keeping it simple? Not when the songs are being reproduced with layers of interesting arrangements. THE REAL builds on its own foundation and they are patient, with themselves, and the organic process of music. A refreshing break from the -crank it out as fast as you can- pressure, that the music world can bring to any artist. Bravo.

This intro opens the album and brings you in. It has twists and turns with acoustic creations from Chris McCann that intrigue. THE REAL makes a great start to this new adventure.

Justin Idems comes through, strong and confident, as the lead voice of THE REAL. His vocals have great quality and range, and he shows appropriate control. Chris McCann hangs some heavy riffs over the steady basslines. Once this song starts, you quickly understand what THE REAL is all about. "All Or Nothing" is a blast to the current past of what music fans loved about the Pearl Jam eras of grunge rock. Low gruff vocals, with high sticks drums, rolling guitar phrasing, explosive refrains. They nail this genre and make it their own. Lyrics are easily accessible and streamlined, not to distract from the track. Rhythms and timing circle back to bring closure to the song, Randall Mathieu and Todd Gallant contribute with bass and percussion. Each loop is more intense, as backing vocals bring on more passion from the band. A little improv from Justin Idems closes it out. Great song.

A low hanging rhythm with Justin on vocals, brings up this unconscious dream of dark and tempting relationships. Chris and Kendra Brasz wrap around each track with burning harmonies, guitar licks that accent the song, but don't overwhelm it and interesting solos that are not self indulgent. I heard some straight out metal on this track. Loved it!

All great rock bands need a quick pocket collection of power ballads. This is it for THE REAL and it's well done. The intro piano keys are beautiful, with edge guitar brought in for the mountain of sound they create. Harmony vocals and layers of instruments uphold the themes and keep them in the forefront. The drums and percussions were timed right, mixing both old school 70's phrasing with contemporary spaces.

The path of no resistance is the path THE REAL chose to take, but it is all right. This is a tune of triumph and breaks through to the light of accomplishment in any area of your life. THE REAL lyrics are inspiring and deep in all tracks. Moving forward always, they embrace life on its terms and bring the listener along. The running rhythm of the whole track have a shuffle effect that keeps the song moving and is a great bridge for what's to come.

So I've cheated on this one. Becks has evolved as a great song for quite some time now, and my first interaction with this band was around this song and it made me a follower. THEY ROCK this tune. This is a mix of modern rock as it should be, and a quality throw back to the likes of YES and FOGHAT. Progressive rockers take note that many of its qualities can be integrated in short parts, if it's the right song. The phrasing approaches pop, which is a good thing, because our dream here on BBR, is that quality rock will come back to radio and the mainstream.

Dreamy tones are fluid in this run on track that will keep you company late at night or on a long drive home. Idems voice is the focal point of the song. Melodies add texture. Progressive fusions follow to round out the sound.

We love the funk! And THE REAL brings it on with a rock funk punk medley of change-ups that show their creative force.

I love hearing the hand slaps against the acoustic on this track. It sounds as if you are hearing it live in a small club. The lyrics to this are beautiful. The message is to discover and prepare for the transitions in life, small and eternal. To have this concept captured in such an elegant song was powerful.

This was a blast! THE REAL went techno and pulled in production engineers to set Becks into outer space. I sometimes cringe when bands do this, because it drains the true musicianship out of the song, and then you can't get it back. But this version was really changed up, not just remixed, making sure that Justin's vocals still come through in that soulful way. Great job. 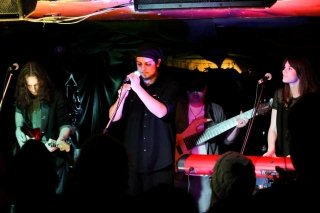 BIOGRAPHY: After more than a year of demos, pre-production, budget tracking sessions, fund raising, and favours, The Real have released their debut album: "Another First Step."

A self produced, independent release the record making process was truly hands-on - "Having invested considerable time, energy and let's face it money in to our post-secondary studies, I think we really wanted to undertake something that would make good use of those skills," says Justin. "Both Chris and I studied audio engineering and production and since we had been collaborating on music on and off for the past 10 years we figured we could try our hand at a completely self-produced project." The pair set out with a plan: write and demo 30 songs in their home studio, before even seeking other musicians to form a band - "We really wanted a planned and systematic approach to this band, we wanted to use the knowledge we'd gained from years playing music, and studying business and technical side to fast track the project, and try to avoid some of the pitfalls we had encountered in other projects." After a few months the initial songwriting period was complete and all that remained was some targeted networking to find the right players and complete the line-up.

"I suggested we try to bring Kendra aboard, we had been co-workers at a local music school," recalls Chris. "I knew that she was an excellent singer and pianist as well she brought another piece to the puzzle in that she was studying music in university." - a fine arts major at York University, Ms.Brasz has since completed her degree. "Kendra really rounded out our group, our dynamic, and helped us pull our heads out of engineer/producer mode." - says Justin. When it came to help on the back end Justin reached out to some colleagues from school - "The first guy that came to mind for drums was Fil Smialek, hard-hitting, precise, the guy is a machine, I remember reading an article where Dave Matthews said that he just approached the best musicians in his town and asked if they would join his band, I figured I would do the same thing, who would have guessed they would say yes? When I asked Chris Evans to come aboard on bass we had a band consisting of 4 audio engineers and a music major!"

With songs and a line-up in place the band took to performing regularly - "we wanted to test the songs out on audiences, get a feel for which tracks were strongest, and improve those arrangements live. We narrowed down a track list, emptied our savings, sold some gear and got to work." The band reached out to industry contacts during the process with unexpected results: "We had incredible assistance with this record we worked with Brian Moncarz (Moneen, Pilot Speed), Alf Annibalini (Big Sugar, Danko Jones), Joel Kazmi (JackSoul) and even tracked at Metalworks on the Neve in Studio 1 thanks to help from Gil Moore (MW Studio Owner, Triumph)" all of these people went the extra mile to help us make our record on a razor thin budget."

The result is a 10 song trip through their experience with tracks ranging from seething alternative rock, classic and blues tinged numbers and even the introduction of some electronic production elements - "I reached out to a good friend of mine, electronic producer Quewin, for some programmed elements on one of our tracks, and he did such a good job we gave him a spot for a remix on the record." says Justin - "Overall we are very happy with all of the tracks on the record, we enjoyed the process and learned a lot I hope you enjoy."

Another First Step is now available on:

CD (available from the band) with artwork by Anthony Ventura (www.evolve-r.com)