Details
Written by Bluebird
Published: May 11 2013 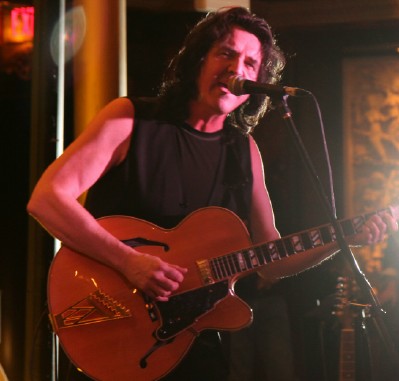 Mixonline.com to Quincy Jones: What aspects of your personality helped make you a successful producer?

Quincy Jones: I don't think it's about personality. It's about judgment.

So many artists self-produce their records these days and it is an exciting time for creativity. Given this vast landscape, what makes an original record stand out? The legendary Quincy Jones makes a point when he says, "It's about judgment." Choices.

During the era when rock and roll was at a peak of loud, and songs were first seen on MTV, as well as heard, Charlie Farren with the Joe Perry Project and later, Farrenheit, brought guitar soaring blues rock and 80's muses to the screens and big stages. Teaming up with long time friend and musician colleague, Jon Butcher, the vocal contrasts and traditions continued throughout the decades, packing live shows, releasing albums and continuing to record, while many artists from that era faded out. Charlie Farren is solo now and still going strong. Recording from his FMansion Studio, and Studio Bopnique, he has self-produced a new record called, Tuesday. The title track, "Tuesday," was co-produced by Farren and Anthony Resta. The CD was engineered by Karyadi Sutedja and Charlie Farren. How did they make this album reflect all that Mr. Farren has to offer? Judgment. Choices.

This ten track set covers the range of talents that Charlie Farren has seasoned in the decades playing rock, pop, jazz and blues music. Each song is fresh and eclectic, pure to the sounds that Farren values in his productions. Real music, real instruments, creative songwriting that is accessible to everyone, inspired by a true blue soul - that's the Farren ethic you will get every time.

There is an inherent sadness in this song that immediately strikes you. The strings by Cameron Stone are beautiful. Anthony Resta added Sci Fi Mambo Guitars. Compared to the Beatles' elegant classic, "Yesterday," the ballad would connect with a depth of pain in any context. It describes the type of human suffering where someone must find the strength to go on, literally, day by day.

And then, the story of how this song was written unfolds and the listeners are brought into the lives of music history in real time. Charlie Farren told Dick Trust in an interview posted in The Boston Globe , that the song, "Tuesday" was originally written by Brad Delp of the rock band, Boston. The lead vocalist had played the song for him about ten years ago after judging a rock station songwriting contest together. Listening to it raw in Delp's car, Farren thought the song reminded him of the Beatles' classic ballad, "Yesterday". Farren recalls that Brad Delp demo'd the song many times, but never finished it. Sadly, Brad Delp committed suicide on March 9, 2007. "At 55, he left his fiancée, two adult children, and, among other works either not completed or not released, the unfinished song 'Tuesday.'" (Trust/Farren, Boston Globe, 2013).

Charlie went on to say that in finishing his current record, he went for a drive, hoping to be inspired for another song to add to the collection. During this ride, he heard the song, "Yesterday" come on the radio and he remembered Brad Delp's unrecorded track from years ago. He contacted Delp's family and they agreed to allow Charlie to finish the song, "Tuesday". It was co-produced with Anthony J. Resta (who worked with Elton John, Duran Duran, and many others).

I wrote to Charlie about this recent release, telling him how moved I was about the history of the song, "Tuesday." This is what he said:

The other really interesting element that I just learned about, is Brad (Delp) wrote that song after reading the Tuesday morning paper the day after John Lennon was killed. It's a lament about the passing of John Lennon – I think that adds a new and fascinating context to the song. Thanks for loving the record – and thanks for writing to me and telling me you love the record. I think that's the real reason I love making records! (Charlie Farren/Bluebirdreviews, 2013).

Hold Me Down And Love Me

A low toned groove with Charlie's warm voice comes in for a fresh new day and a chance to jump into some great vibes. The layers of production make the song echo with interest and challenges you to keep up with the hard to get Farren, as he moves from jazz to rock solos. "Hold Me Down And Love Me" is not as easy as you think, catch him if you can!

That Kind Of Girl

On every record, there is usually one song where Charlie Farren hosts a party for your mind. On the album, FBI (2011), he belts out "Hold Me Back", on World Gone Wild (2003) he rants, "Get A Life". The energy continues with the album Tuesday (2013) using, "That Kind Of Girl". A fun, move your body, throw back chant, the album debuts Charlie's daughter, Veronica Farren. Love the straightforward guitar work here. Let's see this song live with David Lee Roth, eh, Charlie?

Middle Of My Heart

Beautiful Latin guitar picking, and airy background mixes, create a vehicle for a narrative that expresses the aches of a once in a lifetime relationship. Veronica Farren provides back up vocals on this track too. Building intensity toward the bridge, Charlie's voice takes a deeper tone and invites change, closeness. It is a story unfolding with sound and images. You are brought in to the song and cheer on the hero for a happy ending. Regardless of the character's fates, it is the listener who wins, with a hauntingly smooth, romantic tune to remember.

In the production style of Quincy Jones, Charlie Farren blends textures into a jazz tune, with guitar as the lead collaborator. His casual style, laughs, solos and improvs, contrast with the highly tuned and structured framework that scaffolds this track. I see you snapping your fingers there, moving in your seat, you wanna get up and dance ... don't hide it!

The deep bass lines on this song are an interesting contrast to the rest of the record. This song is driven by anticipation. Charlie shapes the song phrasing to reflect their meaning. The guitar floats in and out of the bass line structure and the run on feel of the song give that sense of movement.

Bring on the funk! Who hasn't been taken for a ride in a relationship? In a job deal? In the music business? Thank you, Charlie, now we have an anthem to follow our intuitions and walk away from the games people play. But this time, we can do it with humor - and swagger!

Filling My Life With Love

Fusions of exotic guitar picking with sweet high notes creates a universal song. This would be beautiful for a wedding or a movie soundtrack. It is accessible to everyone, yet signature Charlie Farren.

There are thousands of songs that name "Maria". From Leonard Bernstein's West Side Story epic, "Maria" to B.W. Stevenson's country rock hit, "My Maria," there is an archtype around this name in music. Charlie Farren brings pop to his own history in a fun and light hearted tune about a favorite girl.

The Shock and Awe Of Love

Charlie closes the album with a crescendo of harmonies, guitar effects and mindful experiences. It is a take away message that sounds as if it can be applied not only to relationships, but to a general sense of love for everyone. Love for music, certainly, is projected loud and clear though every song that comes from Charlie Farren and his recording colleagues.

All instruments and vocals are by Charlie Farren with Cameron Stone adding strings to the song, "Tuesday" and Anthony Resta adding Sci Fi Mambo Guitars as well. Veronica Farren provided backing vocals to "Middle of My Heart" and "That Kind Of Girl"

Read about Charlie Farren with Jon Butcher and special guests at the House of Blues here.

I had the honor to interview Charlie Farren and Jon Butcher in 2011, after their collaborative project, FBI was released. What struck me about them was their ability to be open minded about all music. Quality radio, modern rock, historic jump blues, were all part of the conversations that resonated in our time together. The evolution of technology in music production is something that Charlie has also embraced and made his own, even though, he has been in the business long enough to appreciate the beloved LP. And his stories! I told him my favorite song of his is, "Crazy Moon." This lead to a great story of Charlie spending time with Atlantic Record legend, Ahmet Ertegun. It was priceless. Just hearing it was something I will never forget.

For discography and other information about Charlie Farren, visit Charlie's website at: www.charliefarren.com