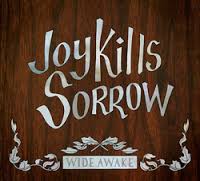 Boston based string band, Joy Kills Sorrow, is releasing a new record on Northampton's Signature Sounds Recordings, (June 4th, 2013). The first thing that strikes you about this record is Emma Beaton's light as clouds vocals. Her voice has a modern, angelic quality, but when the deeper notes are needed and some guttural belts are called for, she digs in and delivers. The string layering is top notch quality and shows mastery, as this is the band's third album. Lauded as more 'indie' than the prior, This Unknown Science, Wide Awake  reflects the sound that they've been searching for, and has demonstrated that Joy Kills Sorrow continues to define their identity, which embraces a pioneer spirit.

Opening track, "Was It You?" introduces the high wire that Joy Kills Sorrow is willing to walk, in order to keep an enjoyable tension to their music. The production builds, but slowly, so the listener is brought into the fold in a timely way. It sails with a natural wind behind it, nothing is forced on this record.

Jazz infused bluegrass? Why not? "Get Along" starts out with spare strings and then blossoms into a rhythmic dance of great paces. The vocals show a lower range of Beaton's voice. The strings are played in harmony at times with some great spunk, like characters in a fun play interacting with each other. The Postal Service’s 2003 electro-pop single "Such Great Heights," is covered in this EP, because Joy Kills Sorrow has been performing it in concert for a while after learning the song during a residency at the Lizard Lounge in Boston (Signature Sound Recordings, 2013). It's a refreshing take on the song, yet continues the smooth feel of a slick recording, but using strings? Bravo! The fast finger picking work of this award winning team can not be overstated and it is definitely to be admired. "Gold In The Deep" is a beautiful ballad, a letter written in real ink. An all knowing assertion comes through the lyrics, in a message of freedom.

Signature Sounds Recordings also posted that guitarist, Matthew Arcara has stated: "It’s a statement about where the band is now and where we’re heading. With this record, we’re concentrating on getting a fuller, bigger, more powerful sound from the band. We want the epic sound of an indie-rock band plugged in, but on acoustic instruments."

Indie rock, unplugged? Let's take it a bit further and add in some blue-eyed soul influences too, when you hear "Working For The Devil". Jazz? "Jake" is a swanky cocktail party tune, that mixes up the entire album to make it well shaken, and very cool. "Enlistee" quietly ends the EP, bringing metronome timing and controlled vocal placement to this carefully crafted song. It then blends what seem like world influences, into the arrangement, offering mystery and perhaps a foreshadowing of what's next with Joy Kills Sorrow, as they continue to bring new adventures to the listener.

Wide Awake, is an enjoyable listening experience and has you backtracking songs to give them a closer spin. It is the type of collection that you can put on your music player and take for a ride, or have playing when a friend is visiting, because there are no fillers and while the tones are consistent, each song brings new interest and curiosity. That being said, this band must be wonderful to watch live, given the speed and accuracy that the tapestry of string musicians can weave.

Accolades for the pre-release of Wide Awake by Joy Kills Sorrow:

"Such Great Heights" is featured on American Songwriter:

"Subtle and snazzy, this new jack acoustic outfit merges bluegrass with jazz like it was the most natural combination in the world." —Los Angeles Daily News

Wide Awake, was lauded by the Boston Globe as "on the cutting edge of acoustic," while Acoustic Guitar describes the band as "accomplished virtuosos, and it shows in every note."

Wide Awake  was co-produced by Joy Kills Sorrow and producer Dan Cardinal. Of the new EP, Arcara notes that it "represents new, fuller, thicker sound for Joy Kills Sorrow—we tried to capture the power of the band at full throttle. It’s a sound we have been after for a while…" and Beaton continues the music is "still deeply infused with our traditional roots, but takes one step further into the indie rock realm."