The Tall Weeds: Tap Into The Energy! 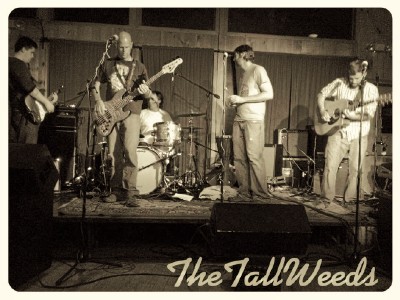 The first thing that grabs you about this band is its name. The Tall Weeds. Weeds are supposed to be a bad thing, a nuisance in your garden, something that people spend the entire summer pulling, spraying, hacking and cutting down. What happens after that? They grow back again. Why? Because the Earth's natural tendencies are stronger than the human efforts to put everything in a landscaped box. The Tall Weeds are an organic, naturally growing entity that won't be suppressed. Quietly rising without effort, but surprise, The Tall Weeds stand bold, proud, and finally, admired - in a state of natural curiosity. Their motto? Tap into the energy.

The band has been playing clubs in New York for several years now. The Chance in Poughkeepsie among others, has given them more than a local following. The Chance is a great venue. I remember seeing BB King there, as well as multiple sets of the Zeppelin tinged, Zebra and many a reggae band. Always a full house, it has historically accommodated the best bands in the Hudson Valley, including legendary rockers such as, Bob Dylan and David Bowie. Watch the landscape, and the rise of The Tall Weeds.

By popular demand, the Weeds finally put together an EP for their fans to hold on to. Cutting into their best sets, the three song tracks are a preview of what's to come:

Raging Water. Spare acoustic and on tap drums create a cloud effect to open this song that speaks magic. It builds,  with the addition of vocals, then bursts into a great harmony of strength and hope. "Raging water, rushing water, won't you take me away." A groove-able, danceable tune shows that less is more in that The Tall Weeds go for quality over quantity. Blues riffs wrap around the acoustic set of chords to create a rock sound, which is solid foundation for this band. Love that harp!

Everything's In The Way. This starts up in the singer songwriter style of America. The bass line blazes a path where spaces are open to explore. Rock harmonies are bold and steady, as the rhythm walks you along the journey. A fusion vibe runs across the background, while the harp speaks to the natural sightings of horses, birds and an enduring appreciation for things we can't explain, like sun.

Northwinds. Rhythmic roots rock leads with a full on sound of harp and funked up strings that add a mysterious background to this song. Leads have a 1970's tinge to them, and a classic rock influence is definitely there. The Tall Weeds have a sound all their own. The drum tracks are fast and keep up the pace, the song runs like water over rocks, yet the atmosphere is slow and meditative. Imagine standing near a clear running stream, and then you look up at the sky - that's the sound of the Tall Weeds.

The Tall Weeds are a five piece original rock band based out of Beacon, New York. The band was formed by Michael Zentz and Patrick Reay during a snow storm in 2011 when they were snowed in with an acoustic guitar, a loop pedal, and a few beers. The Tall Weeds are: Patrick Reay – lead vocals and harmonica, Michael Zentz – rhythm guitar and back-up vocals, Whitey – bass and back-up vocals, Billy Hopkins – lead guitar, and Dave M – drums and back-up vocals. They pull from an eclectic mix of influences and from the powers of the Hudson Valley to create their music. They live by their lyric and motto "Tap into the energy!"