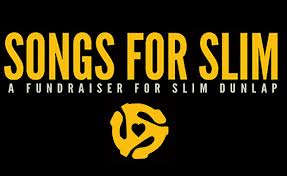 One thing about Jakob Dylan is that his distinctive, velvet voice can cut through any type of genre. When bands match up with him, they can play bold and loud, because Dylan holds his own and makes it all work. We caught The Wallflowers live this year and their new album Glad All Over (Columbia) is filled with multiple genre bending flashes of greatness, including "Reboot The Mission"'s direct hit of Clash vibe-wave, featuring Mick Jones, and the melodic swoon single, "Love Is A Country". Dylan said on stage that he 'grew up on bands' and always enjoyed being in bands. Confident in Stuart Mathis' lead guitarwork and Jack Irons' steady hand at the drumkit, The Wallflowers can belt out a blues tune, both live and in the studio. They left our cozy Calvin Theatre, to share the bill with none other than Eric Clapton on his tour just months later. Meanwhile Bob Dylan was touring the Northeast just one state away at UMass. In the thick of rock history and without much time to spare, what does Jakob Dylan do? He contributes a track to support Slim Dunlap's health care fundraiser, Songs For Slim.

~And Joe Henry's stellar musicianship? That is still being absorbed by the general public, meanwhile, the man just keeps cranking out genius.

Preview/Purchase the songs on iTunes HERE. 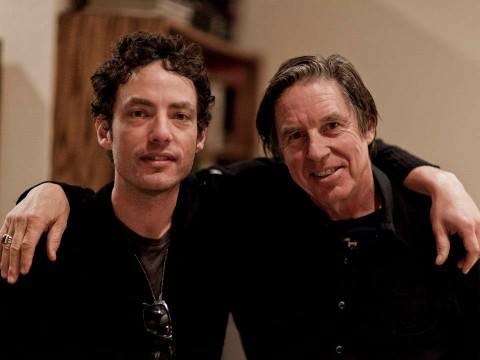 Jay Bellerose kicks up some dust with his drumming that introduces the song, wrapped in blues riffs, spilled out by Greg Leisz. Great production from Joe Henry comes in, where he makes us wait for Jakob Dylan's voice to enter. Dylan is steady and sings right to the blue zone, keeping his signature smoke voice a centerpiece, but leaving room for the instrumentation. More guitar comes through the invitation of Val McCallum, who also provided backing vocals, along with John Doe. Keefus Ciancia offers high keys piano, with Jennifer Condos on bass, for the juke joint feel of the song, while the whole tune just hums along. Rock and Roll love affairs may not be long lasting, but they can be stories of a lifetime. Despite some down-turned lessons in life, this tune is upbeat and comfortable, like hanging out with an old friend just one more hour, because the night, at least for Slim, is certainly not over yet.

Recorded and mixed by Ryan Freeland 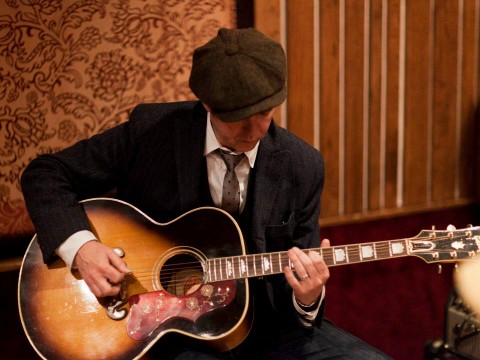 The contrast of Joe Henry's gruff voice and gritty lyrics with beautiful soprano sax, acoustics and piano, is a perfect blend that gets all you want to say - out in one shot. Validating the spirit, lifting the air in the room, and saying it like it is, this is a track to stand the test of time. It is filled with experience and unspoken advice.

Levon Henry's soprano sax took center stage with good reason. The sound of it reminded me of some old Van Morrison No Guru soul tracks that stay with you for days. The electrics are unplugged and Greg Leisz, Val McCallum, who recently played with Jackson Browne, bring their acoustic smarts to the table. Double bass is introduced by David Piltch for a smooth effect on the whole production of it. Patrick Warren on piano underlines the song with elegance. With tough times hard to face, "Taken On The Chin" is a statement of pride and realism- in music imagery.

This Songs For Slim series carries with it, some of the best artistry I've heard in a long time. The only thing that would make it perfect, is for Mr. Slim Dunlap to be in better health.

"TAKEN ON THE CHIN" Credits:

Recorded and mixed by Ryan Freeland

Cover art from the Chris Mars painting "A Soother For Dwayne"

This month we're excited to announce a single with fantastic tracks from Jakob Dylan of The Wallflowers and Joe Henry . Dylan and his crack band of A-list LA session players (Jennifer Condos, Jay Bellerose, Greg Leisz, Keefus Ciancia and Val McCallum) offer up a rollicking, bluesy interpretation of "Ain't No Fair (In A Rock 'N' Roll Affair)," a classic Slim rocker and crowd favorite. Recorded in North Hollywood and produced by Joe Henry, "Ain't No Fair" also features a guest appearance by John Doe (X, The Knitters) on backing vocals. Speaking of Joe Henry, his work over the last three decades has made him a favorite of discriminating music fans worldwide, distinguishing himself both as an ever-evolving solo artist and an in-demand producer. He's also been a key part of the Songs For Slim project; his contributions as producer for several of the SFS releases have been invaluable.

[Joe Henry then] takes center stage for an impassioned reading of "Taken On The Chin," Slim's mournful journey to the dark side of life. Henry delivers a stunning vocal performance as he and a slightly different batch of fab session-eers (David Piltch, Jay Bellerose, Val McCallum, Greg Leisz, Patrick Warren and his son Levon) masterfully create a piece that hits the listener straight in the gut with an emotional wallop that won't soon be forgotten. It's brilliant on every level.

FOR MORE INFORMATION VISIT THE SONGS FOR SLIM WEBSITE:

All tracks are made available digitally after the initial auctions and there will be a CD compilation of all songs + bonus tracks in November.

Purchase MP3s of the this release on iTunes.

The songs are also available digitally on Amazon.com.

Read our exclusive interview with Kevin Bowe about the making of The Replacements' collection for SFS here.