The Nashville-based cover/original band TN Twisters are as American as apple pie, living out their dream on "the historic Broadway district, where millions trek each year to get a dose of live country music". The sextet formed when Carol "Beth" Garner (left), the band's lead singer and guitarist, collaborated with fiddle player IvaLee Pitts (not shown), Stan Saxon on drums (hat), Gage Boecker on the upright bass (far right), multi-instrumentalist and internationally acclaimed Rory Hoffman (not shown) on accordion, harmonicas, and saxophone, and violin goddess Olivia McPeek (right).

"It's a real grassroots operation," discloses Garner, during our recent phone conversation wherein she freely discusses the challenges of being a small fish in a big pond and her multiple roles as manager, singer, songwriter, guitarist, and website designer. Most recently, artwork creator and music producer were added to an already impressive list of accomplishments. The tone of her voice is friendly, and yet determined. It is clear she loves to have fun and make music with her bandmates.

I am told the group thrives on crowd interplay and on-stage antics. "The drummer, Stan, "Stanimal", he's the comedian," says Garner, referring to his light-hearted humor that rolls off-the-cuff at any given moment. What's more? The female lead-trio engage in a game of Twister while playing their respective instruments, owing to their unique band name. Such playfulness has set this act apart from other musical line-ups in the area. So much so, they caught the attention of two tourists in 2013, who later flew the entire band to Norway to play at the couple's restaurant/tavern. Plans to return next summer for an expanded tour in the region are in the works. 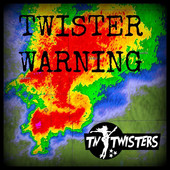 The TN Twisters' cross expansive terrain on their debut album, Twister Warning, with twin fiddles, slide guitar, squeezebox, accordian, sax music, and reverberating "yodel le he hoo". The listener is treated to an authentically eclectic mixture of styles that transcend one genre, one space, channeling to the heart of America and the deep South. Country meets rock; Americana intersects blues. And the vibrant sounds of New Orleans fuse with traditional jazz and folk. It's a seven song musical whirlwind that makes you feel like you've visited the Grand Ole Opry, a famous blues-jazz dinner club, and local barn dance, all in one sitting. The songs are well-crafted, with catchy melodies, smooth harmonies and impeccable musicianship.

On first listen, "Trouble of Mine" became one of my favorite tracks. I liken Garner's tender and carefree vocal to that of Ricky Lee Jones or Cheryl Crow. Backed by beautifully sung harmonies, the song wipes away any stress and carries you off to a safe place. It's very well done and, in my opinion, a hit song.

Imaginative songwriting skills turn to reality on "No Reply", as Garner tackles technology and modern day break-ups. It's catchy, up-tempo and a track that'll resonate with anyone who has (unfortunately) been dumped in this manner.

Reminiscent of any number of "corn pone" comedic skits on the American television variety show, Hee Haw, the TN Twisters' dead-pan delivery on "Lil Ol Lady" will have you hanging onto each verse. "Faster! Faster! Faster!" This particular piece must be a visually-dramatic, laugh-a-minute, highlight of their live shows. "Faster!"

All in all, there's nothing stale, traditional, or forgettable about Twister Warning. The songwriting and musicianship is expressive, uptempo, a breath of fresh air and strikingly memorable. It is not to be categorized, but embraced.

Twister Warning is available for preview and purchase via cdbaby. Stay in the loop by following the TN Twisters via their website, Facebook , Reverbnation, and Twitter. And if you get the opportunity to see the band live, please send me some feedback.