Stesha Cano: Simple As Everything 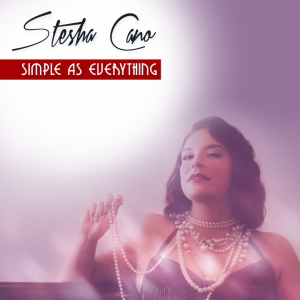 One of the joys of running an independent music review website is the freedom to follow artists from their early careers into later seasons. Stesha Cano debuted Like A Bee in 2011 with a mix of jazz and soul that stunned audiences with its raw power.

Her sophomore album, Simple As Everything, is even stronger as she has established herself in the production world and built more sophisticated arrangements, while keeping the core of her writing locked in emotional ground zero.

We had some questions for Stesha about her influences and inspirations. Here is what she said:

BBR: Who are your classic jazz music influences?

Stesha Cano: I always heard it said that a jazz singer should try to emulate the sound of a horn or woodwind when improvising, this definitely sticks in my mind and when listening to classic jazz, I find myself drawn to horn and woodwind solos just as much as vocals. Clarinet in particular is my favorite instrument to listen to. It's sound is so inviting and smooth, I think it sounds like butter would, if it could go solo! Artie Shaw is my favorite jazz clarinetist. I am also a huge fan of Chet Baker, he was a trumpet god, but also I find his vocals to be so sweet and subdued. In my opinion, his vocal technique been seriously underrated, his tone and delivery sounds a lot like Mel Torme to me, whom I also love. As far as playing live jazz, I get such a high from swing music, it is by far my favorite kind of jazz to partake in. It's all about that rhythm, when the band starts swinging so hard I feel safe to take melodic liberties and explore with improvisation in directions that I have never gone before, that's an amazing feeling.

BBR: Are there any women in jazz that you admire, respect, emulate?

Stesha Cano: There have been so many incredible women in jazz to pull from. So many styles that have, over time, influenced all musicians without them even realizing it. I have never tried to model my vocals after anyone in particular, but I do believe that listening to different female vocalists has lead me to try different styles and techniques. When I first got into jazz, I had been playing funk, soul and R&B gigs out 3 or 4 times a week for a number or years, so I had been in the powerhouse vocal mode for quite some time. What I love about studying jazz is that it forced me to tone it down a bit. I wanted to focus on learning the heads to these tunes properly before turning them inside out with improvisation. It's important to learn to walk before you learn to run. I made a point to pay extra attention to vocalists like Astrud Gilberto, who use very little vibrato or other "vocal gymnastics" in their singing. It takes a whole new level of control to sing so straight and concise, but it is an enjoyable challenge to take on.

Of course at the end of the day, I will always be attracted to soulful divas, so for this reason I would have to say that Sarah Vaughn is on a pedestal for me. Her vocal power and musical knowledge are so evident in all of her recordings. There is a confidence in her voice, she was a strong woman and you can hear it in her scatting, her piano playing, her larger than life rich and beautiful voice.

Billie Holiday is the vocalist who can make me weep instantly with her emotive vocals. People always talk about her limited range, but this woman brought more feeling into one octave than many can do with five. She was really something special. I even love the grittiness of her early recordings, they are imperfectly perfect, and you can tell that she really knew what it meant to sing the blues.

To sample the record go to the:

SIMPLE AS EVERYTHING iTunes Link: https://itunes.apple.com/us/album/simple-as-everything/id731999509

"Simple As Everything" melds a more modern approach to her signature R&B styling, with an intriguing return to roots of the old south, early blues, and traditional jazz. All instrumentation was recorded live, most simultaneously, for terrifically fresh energy. On several songs, Cano uses "the magic of MIDI," adding delicately placed layers of electronic sounds which, she believes, "add so much ambiance ... it would be hard to capture with anything else."

This album is a collection of all original works written by Stesha Cano. Produced by Stesha Cano, Josh Small, Daryl Rhodes and Kent Palmer, Rhodes doubles to arrange strings, while Jim Winters is brought in to arrange the horn pieces. Josh Small provided the recording, mixing and mastering. Photography and album art by Monahan Design.

The album opens up with a reggae type of vibe and Stesha's intro track shows a great foundation of her range. She has her own signature sound, which is a modern take on classic jazz and blue-eyed soul. Her voice is pure and crystal clear no matter what she is singing. Still early in her career, her style is reflective of natural talent, not forced or contrived to 'sound like' anything but herself.

The acoustic work in this song, lends a gentle background to this next piece and completely changes the mood of the record. It also gives Stesha a chance to branch out into a singer-songwriter style with a Sarah McLachlan echo style.

This is where the jazz comes to stay. Gentle guitar and dreamy tones blend together with Stesha's rich soaring vocals. Horns are used for effect and the bass line hums. There is a guitar solo that adds depth to the piece during the bridge, which is well placed. The drums and percussion make the song glimmer.

"with every shimmer of the wind, we begin to end and I will disappear ..."

This track has a beautiful flow. Stesha's improvs float over the exquisite arrangements, highlighting them, as sun reflects water. It is enjoyable, relaxing, and gives the listener a little vacation from worldly troubles.

A full on production makes "Mad Love" a radio friendly jazz favorite. The flute highlights the joyous notes and the backup vocals with chorus anthems give it gospel power. There was a hint of Natalie Merchant's vibe in this track too. It's a positive, straight on self esteem boost for every soul.

New Orleans style brass and drums in southern style, mixed with clever stepwise phrasing and Stesha's demure vocal story, telling builds intrigue. Stesha's first album, Like A Bee, was great for imagery and narrative. This is her strength as a songwriter.

The title track starts sparse and very personal in Stesha's solo voice, then builds in production, using layers and mirrored harmonies, with haunting echoes. Beautiful percussions pulse the philosophy of balancing survival with the pain of every day life. "If I don't fly then I may drown into my sea of salty tears ..."

Great horns and a jumping beat in this song. The natural high is something to celebrate, as women's strength endures.

Primal, yet lady like, the metaphor of the fruit in romantic innuendos has been a classic analogy. Sweet poetics pour from Stesha's expressive tones with cautions and elations that connect the images. Contemporary jazz artists like Norah Jones and Esperanza Spalding come to mind, as these women take risks with their vocals and lyrics, yet preserve the respectful jazz forms that make them slip through your consciousness like a breeze.

The closing track has a funky vibe, which fun for the last song of a record. Gospel and spiritual wisdom comes from human experience and its honest expression.

Simple As Everything has no filler. Stesha Cano and her superb jazz band bring forth contemporary songs, with a nod to the traditions of great women in jazz, blues, and classic songwriting.

Pay a visit to Stesha Cano at her website: www.steshacano.com .