Stream the record on ROLLING STONE. 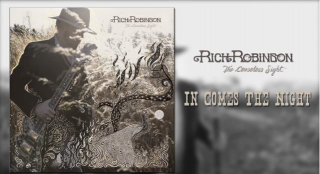 Every time an artist releases a solo record, and he or she is a prominent member of a relevant band, there will be comparisons. This very relevant record by Rich Robinson is going to be no different.

He is a member of one of the finest bands in rock & roll, The Black Crowes. He is a principle songwriter, band leader, musical director, guitarist and singer in the band. So consequently, Rich's influence on the sound of the Crowes is huge.

Being a Crowes fan, I realize that Rich Robinson has more to do with The Black Crowes sound than anyone else. Even his brother, front man, singer and songwriter, Chris Robinson, doesn't make solo records that sound like The Black Crowes music. Chris' vocals, of course, but his music, no.

So, with that being said, this is not a Black Crowes record. Ceaseless Sight is a Rich Robinson record. The music has a lot of the familiar song structuring, intros and the same wailing guitar licks that Crowes fans have come to crave. The big difference here, is that Rich is singing all the lead vocals. As the opening song begins, you feel the music could be The Black Crowes, but the voice isn't. By the second chorus, the Crowes leave your mind, as you dive into the strongest Rich Robinson solo album to date.

Rich began writing music when he was just seventeen for Shake Your Money Maker, The Black Crowes' first album, which went on to sell seven million copies. For the next ten years Rich's songwriting continued to produce albums with totaled sales of more than twenty five million copies for The Black Crowes.

The Crowes decided to take some time off in 2001. This gave Rich the opportunity to record his first solo album, PAPER, which he released in 2004. The Crowes joined back up and it wasn't until the band took another break in 2010, that Rich released his second solo record, Through A Crooked Sun (2011), recorded in Woodstock, New York at Applehead Recording. The album had guest performances by Warren Haynes and Larry Campbell. Campbell, a respected musician and producer, also was a songwriting partner of Levon Helm and continues to play in Helms Midnight Ramble Band.

Robinson's latest work and third solo record, Ceaseless Sight, has twelve very strong Rich Robinson songs and is as cohesive as any collection has been. Each song is intoxicating and you find yourself singing along by the second helping. Rich's voice seems to blend in smoothly with the music and tone of the songs. Lyrically the songs are poised like beautiful and thoughtful poems - but undetected by the casual listener. This is Rock & Roll!

The album has a comfortable mix of rockers and ballads. The first song, "I Know You," opens with a riff that is all Robinson's, but the song has a Rolling Stones feel and simplicity, with the best of both worlds. It is easy to imagine Jagger strutting around singing the chorus,"I know you, you got a penchant for fallin', you grabbed my neck and threw me into the cauldron," until Robinson gives you his unmistakable guitar licks. "Down The Road" starts with an acoustic guitar, and gives you something Robinson hasn't with The Crowes (ah-ha! comparisons!) as he sings,

"This is living, A life worth living, no pressing motives , no calls to make, down the road you leave behind a world you never knew you didn't need to find." (Rich Robinson, "Down The Road," from Ceaseless Sight, 2014.)

On "One Road Hill," Robison sings "I saw my Saint, he fell away. The fall fell short, he came back to me. Now it seems he's here to stay on the one road hill I took today." The song has some beautiful guitar work and infectious harmonies that Amy Helm shares with Rich. "The Giving Key" is another beautifully arraigned and executed song with Amy Helm again, joining Rich and with terrific keyboards by Marco Benevento. Also singing the background vocals, Rich and Helm's voices fit each other well and fill the song perfectly. Sure to please, Robinson strategically places a sensational guitar solo just to seal the deal.

"This Unfortunate Show" starts with a guitar lick that would fit well on any Black Crowes record (ah-ha! comparison!). The slide guitar and the harmonies with Katherine Ottoson are so Crowes and Stones you find yourself singing "I don't care to stay, It's not a problem to call it a day" The sixth song, "In Comes the Night," is another song that stands out, the lyrics have a maturity and spirituality like the others on this album. I guess if you think The Black Crowes music matters, then you will find this album matters equally as much. As a big Crowes fan, I can say that as long as Rich Robinson is releasing work - I am there. Whether writing for a Crowes' album or his own, this is amongst Rich's best work and also gives us something the Crowes, in all their grandeur, somehow seem unable to.

So we are only half way through Ceaseless Sight's twelve songs. "Inside" has some greasy guitar that feels like you have heard before and music you may find familiar. "Inside" also has a great keyboard track from Benevento, which could fit on any Crowes record. "I Have A Feeling" has some nice drum work from Joe Magistro, while Robinson's multiple echoing quick licks make 'I Have A Feeling' complete. 'I Remember' is s a song that feels like Levon Helms influence is all through it. Flying harmonies and soaring guitar from Robinson make "I Remember" another great song on the record.

"In You" is laid back as Robinson sings "In you seems to be no more lonely. In you, at last I am truly found. A true love is a love that gives but never expects to receive." Again, we get a perfect seal-the-deal-guitar towards the song's end. In "Trial and Faith," the song's second to last song has a Mick Fleetwood drum sound, similar to "Tusk," just lighter. The feel is sixties, think Jefferson Airplane with a constant wailing slide guitar.

The album's last song is an instrumental. "Obscure The Day," sounds like something Zeppelin had in the vault from the Kashmir sessions. Remember Rich and Jimmy Page traded many a lick when The Black Crowes were his band for an entire tour playing a mostly Zep setlist. Lyrics are provided with the liner notes. The choice to not add vocals isn't obvious until a few listens. "Obscure the Day's" music is so precise and deliberate, that singing the lyrics would have taken from the beauty of it.

Rich Robinson is currently touring in support of Ceaseless Sight. Shows in the U.S. start in California, and go across the country all the way to Maine. Performances are booked in the United Kingdom, The Netherlands and Poland in June, and in Canada for September. 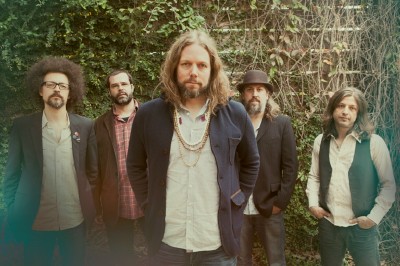 Robinson, who co-founded The Black Crowes with older brother Chris Robinson and drummer Steve Gorman during the mid-80s in Atlanta, already has two solo studio albums to his credit. The first, "Paper," came in 2004, while his follow-up, "Through a Crooked Sun," arrived in 2011.

LISTEN TO 'IN COMES THE NIGHT' ON BILLBOARD
"I've always approached writing songs for an album as part of a larger work,"
said Robinson. "This album as a whole is one piece and how it fits into my whole
body of work is the other. My new record follows the path of my musical journey
I've been on for 25 years. I feel a strong connection to where I've been
musically, but more importantly where I'm going."