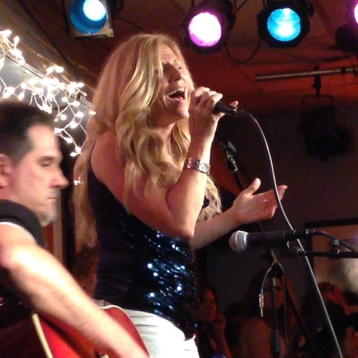 ALBUM:  Walkin' Miles In My Shoes

Because music is subjective and not objective, it must impact me before I am willing to publically comment on someone's livelihood and artisty. I give the review proces all that I can, by listening to a new CD several times. In the end, I discover something about myself and this gigantic world through the voice of a total stranger.

It brings me great pleasure to introduce Robin DeLorenzo.

DeLorenzo may not roll off the tongue the same way as her favorable comparisons in Joplin, Raitt, Turner and Cher. Nonetheless, this powerful Americana singer/songwriter has worked and performed with some of the best in the business. Robin DeLorenzo's biography speaks volume; her artistry deserves attention.

Having been involved with many musical projects and various types of original and cover bands over the years, Robin comfortably settled into her music and in 2010, after working with Emmy Award Winning Producer/Arranger Lisa Ratner (Barbara Streisand) she released Wanna Fly (2010). The CD received rave reviews and the song "Shakey Ground" was awarded a Lady Lake Indie Music Award in January 2012 for Best New Female Song.

In 2012, Robin performed at the Playboy Mansion in Los Angeles in The Steven Tyler Rock and Roll Show which led to her becoming the lead singer for Manny Charlton, co-founder of the 1970's Scottish Rock Band, Nazareth. During her time with Charlton she co-wrote "It Does Something", recorded the ten song CD Hellacious and headlined in places like Chihualhua, Mexico and Muscole Shoals, AL.

Summer 2014, the singer/songwriter performed a run of dates in the City of Country-- Nashville, TN, with a special stop at Bluebird Cafe. (If you're a fan of the hit TV show, "Nashville", then you recognize Bluebird Cafe as being the intimate hot spot where all singing characters make their debut.) Other high-profile engagements included New Jersey State Fair, The Cutting Room in NYC, and Highlands Festival, at Waterloo Village, Stanhope, New Jersey. 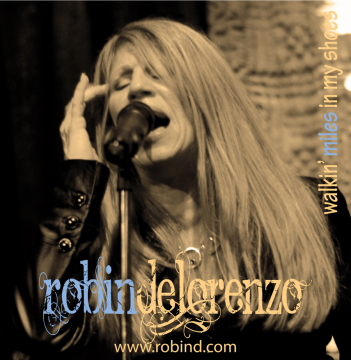 DeLorenzo and her musical compadre's delve into familiar territory, staking ground in blues, rock, country and R&B on the all-original, 12-track, Walkin' Miles In My Shoes. Whenever one instrument is not the center of attention, their harmonious culture blend like one big family. DeLorenzo sings of the good, the bad, and the ugly, in a brutally honest, 'wear-it-all-on-the-sleeve' songwriter approach. Her bright tone turns smokey, then bluesy, to raw and gravelly, a quality that paralell many of today's prominent female vocalists.

Standouts include: "It Does Something", co-written with Manny Charlton, is a sassy, angst-filled roadhouse stomp, featuring a scorned women who stares down an ex-lover before declaring her final ultimatum, "Do Something!" Lively saxophone and harmonica solos on, "Is This Love", continue to deliver an exuberant vibe.

On the title track, "Walkin' Miles in My Shoes", DeLorenzo brings the plight of homeless Americans to the forefront, an important reminder that WE can make a difference if only we take a stand. Then, heartbreak and palpable pain rise to the surface on, "Out of My Head".

The single, "Just A Cheat", is all Country, with plenty of steel lap slide, too. The duet, shared with Byron Smith, hit #7 on Top 40 Country Countdown. Similarly, "Instead of What you Said", should please followers of the syndicated internet radio station.

Hummingbirds flew and danced in the morning light

Around all the nectar she would pour at night

Smiling at us to make us feel alright, but she was hurting, trying to fight

Fight with love and live by faith

To close, acoustic guitar and cello amplify the melancholy, "This Stage is Black", a personalized look at what an artist experiences when their performance is over.

Walkin Miles in My Shoes is the most stirring collection of music I've heard of late. DeLorenzo is not afraid to express real emotion, delivering one powerful message after another. She sings like there is no tomorrow.

If you're in need of a strong shoulder to lean on, I suggest you turn to Robin DeLorenzo's music, it will guide you through tough times.

Indie Music Digest wrote an impressive review, naming DeLorenzo's fourth solo album its Album of the Week and nominating it for Album of the Year. Read the write up here.