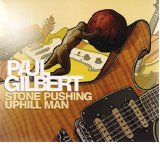 Let's clear something straight away; I think Paul Gilbert's absolute best always comes from his enormous talent on guitar and very rarely through his singing voice. Nevertheless, the album is a delightful pastiche of different music tempos and genres, in which Gilbert's signature playing style take the listeners into a fancy flight into worldwide music at 360 degrees.

Despite clocking off at approximately 42 minutes, the album offers a fabulous package of 8 covers and 3 originals, all played superbly by Gilbert. From pop classics such as Elton John's "Goodbye Yellow Brick Road" to The Beatles' "Why Don't We Do It In The Road," to more stomping rock- tempo charged tunes such as Loverboy's "Working For The Weekend" or The Police's "Murder By Numbers," the American guitarist never ceased to amaze through his eclecticism and infinite class.

The record reaches its peak on the originals, though. The album's title track that closes is the only tune sang by Gilbert and what a treat it is! The lyrics are very intimate, almost sounding personal and the sound goes into a crescendo from acoustic to electric like a rising sun. "Shock Absorber" has almost got some Zeppelin-esque echoes, while the slow number "Purple Without All The Red," is a great exercise of simplicity on guitar. It takes the listeners on an imaginary stroll throughon a South-American sea shore, lulled by the sweetness that the melody of the tune carries.

Thirteen solo albums in - and Paul Gilbert always finds the way to amaze anybody by engaging the listeners on a music path that surely, this extraordinary musician will continue to successfully follow for many years to come.