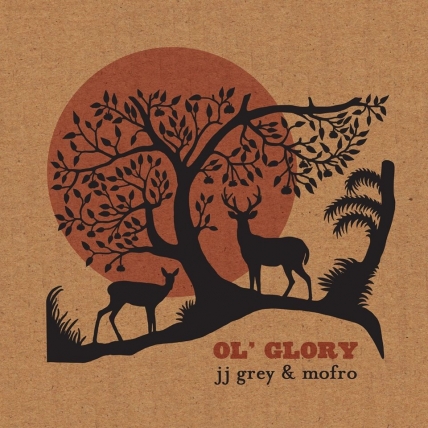 In a time of over-refined and over-produced record making in the last twenty-odd years, this album arrives like a breeze of fresh air in the music business. Born in Jacksonville, Florida, JJ Grey has been nurturing the ambition to entwine the work of two of his most beloved music heroes, Jerry Reed and Otis Redding.

This album fully accomplishes its intent. In his own words, JJ explains: "It's a country record where the stories are all part of one great mystery; it's a blues record with one foot in the church; it's a Memphis soul record that takes place in the country". Very few artists succeed in assembling on just one record so many genres such as soul, R&B, country, blues and gospel. Ol' Glory is, without a shadow of doubt, a fabulous example of creativity at its very best.

This record is played with passion, talent and most of all, a total honesty from Grey and his band. The title track seems to come straight from the Stax's best period; Everything Is A Song has got that natural swagger, both in its sound and lyrics: "I flipped up my collar ah man / I went ahead and put on my best James Dean / and you'd a thought I was Clark Gable squinting through that smoke.". The closing track The Hurricane, is a wonderful blend of Motown-meeting-Country.

Grey is also a refined songwriter and it is a joy to hear his ability in allowing the record to flow so beautifully, both lyrically and musically and without distracting the listener. A little like watching a movie, in which the screenplay runs in perfect synchronicity with the soundtrack.

A record made straight from the heart, going straight to the heart of music lovers.

About Our Author: Giovanni "Gio" Pilato is an Italian music writer, who has been living in UK since 2002. With an enormous passion for music, and life in general, his interest in the communications began at 11 years old. He worked briefly for local radios in his youth and did a one-off radio show on 2007 on the glorious BBC 6Music Radio station in England. Gio started his freelance journalist career in 2012, with Italian artists, and is now mainly focusing on blues artists. To follow Gio Pilato and his all cool radio show, Visit: (RTL 102.5 Cool (Webradio)):  http://www.rtl.it/Cool