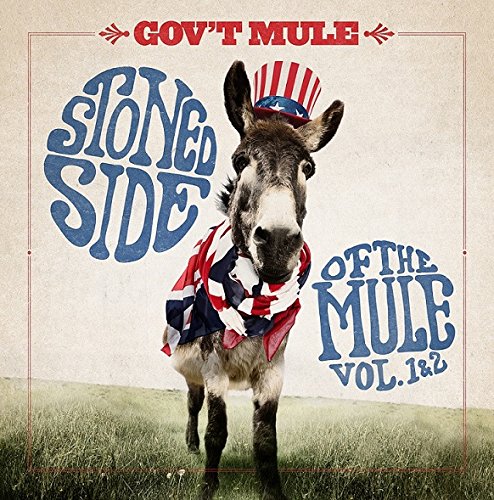 20 years gone by and never a downside. This year in music has got a significant meaning for the carrier of the Gov't Mule. 20 years as a perfect music machine with an incredibly vast music repertoire. The phenomenal American collective has released, to celebrate this landmark in their career, 4 live albums in the last 4 months, each in a different music style, as an ulterior confirmation of their skills and versatility as a band.

After Dark Side Of The Mule (featuring Pink Floyd's classic hits), Sco-Mule (a jazz-infused performance featuring John Scofield, also reviewed previously on BBR) and Dub Side Of The Mule (a tribute to dub/reggae music, featuring Toots Hibbert), here comes the fourth and last release of this monumental artistic project. Stoned Side Of The Mule, as the album title may suggest, is a generous homage to the Rolling Stones music catalogue, with a carefully selected choices of tracks and not necessarily obvious choices to the Stones' super hits.

Recorded in 2009 at the Tower Theater, just out of Philadelphia, Stones Side... sees as Special Guests on horns two extraordinary musicians, Jackie Green and especially Steve Elson on saxophone. The two musicians contribute with their huge skills to embellish and enrich the sound of a band already at the top of their game. The whole performance get that extra notch that can be easily heard on tracks like Slave or Play With Fire, where the  luxury of having Green and Elson adds that almost orchestral sound element to the entire record.

Despite the unusual choices in selecting some tracks from the Stones' catalogue, the Mule don't hesitate to pull out of their sleeves the winning aces, when the time is right. Classics such as Shattered or the closing Brown Sugar never make you stop stomping your feet on the ground until each track is over. The record is released only and exclusively in double-vinyl format, perhaps as testimony  of the big respect that Warren Haynes and the Gov't Mule have and always had for the importance of a historic music format like the vinyl, surely close to their hearts, as of their fans too.

Another masterful music chisel of a great artistic value in the career of this formidable band. A band with incredible creativity that goes beyond times and spaces, because there are not many collectives out there in nowadays music business able to maintain a musical approach so fresh and contemporary like Gov't Mule do.

Stoned Side Of the Mule Vol. 1 & 2 is released by Mascot Label Group. Here the link where the album can be purchased: