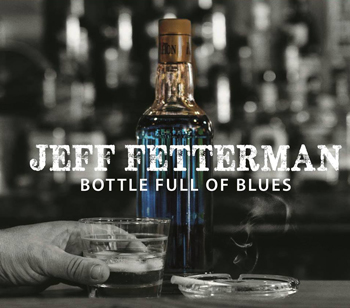 It has been a long journey for Jeff Fetterman, since his 1999 debut album, Ordinary Man, to record Bottle Full Of Blues, perhaps the album of a lifetime. This extraordinary bluesman from Pennsylvania has exponentially increased his popularity, through the years, with fans and media by combining a winning combustion of blues, rock and funk, the very same formula that brought him to write Bottle Full Of Blues.

The album is an elegant exercise of songwriting skills and phenomenal music ability, not just by Fetterman himself but by the whole array of musicians performing on the album too. In that respect, the instrumental Devil's Shuffle pitches to perfection the craftmanship of the whole band, with Fetterman, Otis James on Harmonica, Anthony Brown on keys and Ralph Reitinger III teasing one another in this brilliant number.

There are lots of radio friendly tracks on the album; the opening Paradise starts as a blues/rock, to then deviating to an irresistible funkadelic tempo. Southbound is a rock tune that would have made Chuck Berry and Jerry Lee Lewis ecstatic with joy, with Fettermans' powerful guitar riffs and the band complementing splendidly Fetterman's voice with a muscular performance on this track.

The album title track Bottle Full Of Blues and Wash My Blues Away are delicate, but intense ballads and perhaps the best demonstration of what Jeff Fetterman is all about. Both tracks showcase his incredible guitar ability with some very powerful vocals, as a demonstration of a musical maturity exploding on full blast on this album.

It may be a Bottle Full Of Blues, as the album title suggests, but Jeff Fetterman and his band are far from being uniquely defined as blues musicians. This album, undoubtedly, is a clear statement of Fetterman's music vision and the shape of things to come in his career. A music career that will take him certainly to the zenith of music scene real soon.