Galactic - Into The Deep 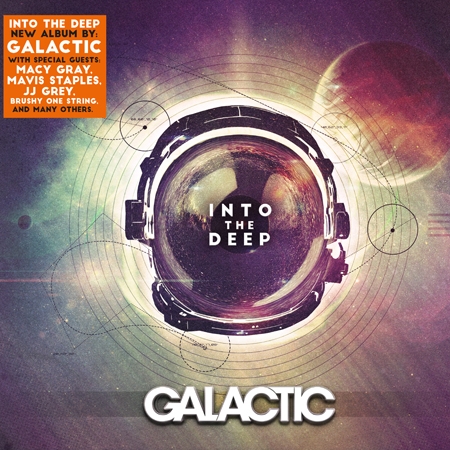 The cover of the album says it all about Galactic's intents about taking their music to outer space. An astronaut's helmet with the moon in the background depicts perfectly the mission that the fabulous New Orleans funk collective want to achieve on their new record, Into The Deep.

Masterfully produced by band members and hugely skilled musicians Ben Ellman and Robert Mercurio, the album showcases a series of infectious R&B and Funk-Soul gems, which include guest appearances of some of the most important artists of this genres of the last three decades of music worldwide.

The title track features a Macy Gray at the top of her form. A slow soul number permeated of that grace and class that emerges, as always, through the voice of the Ohio-born diva. This is just one of the many surprises on Into The Deep, though.

JJ Grey's energy and powerful vocal delivery on Higher And Higher, Mavis Staples deep and passionate performance on Does It Really Make A Difference, David Shaw and Maggie Koehrner's outstanding duet on Dolla Diva, make you fall in love with this album deeper and deeper on each listen.

The instrumental numbers are, though, the key factor on the Galactic's album. Long Live The Borgne, Sugar Doosie and most of all, Buck 77, with that classic 70's tempo that ignites memories of Isaac Hayes at his very best, are true testimony of style, ability and artistry of the highest quality of this fantastic band.

Galactic wanted to take their music through the universe and into space with Into The Deep. Mission accomplished, without a doubt.

Into The Deep is released by Provogue, part of Mascot Label Group and can be purchased here