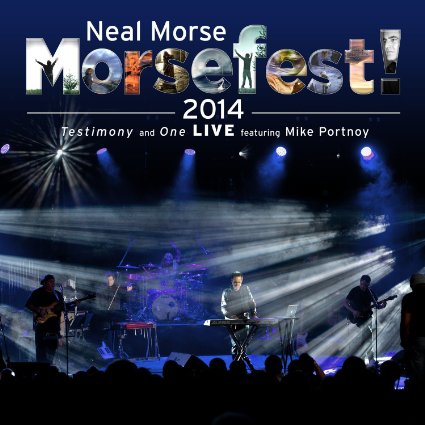 In these modern times, talking of bringing an entire Prog-Rock show to the masses, like the one the California-born Prog-Rock Phenomenon Neal Morse did, is somehow an authentic miracle. A miracle made of sheer passion and belief for a genre that has created the platform, back in the 70's, for the whole rock generation of the 80's and 90's.  Morsefest! 2014 is not one of those Pomp And Circumstances type of releases but a real musical celebration of the genre of phenomenal quality,  through the generous album package of 4 CDs and 2 DVDS.

Neal Morse, through his solo career and previously with bands of the calibre of Transatlantic, Spock's Beard and Flying Colors, has maintained very successfully that music integrity and deep respect towards this music style that made and still make of him one of the most  respected musicians not just only within the Progressive Music World but worldwide.

Morsefest! 2014 is something that unconsciously, must have been in the back of Morse's mind for quite sometimes, although just thanks to an insisting church Pastor and an inspiring talk to Morse's wife, it finally saw the light of the day.

The live album includes the whole two-days setlist, in which Morse played two of his most pivotal albums, Testimony and One in their entirety. Despite the vaste quantity of music on this quadruple CD, there is never a dull moment throughout the whole performances. Through the extraordinary support of his long time fellow friend musician Mike Portnoy and a full orchestra behind him, Morse tells, through these two albums, his whole autobiography in music with such passion, devotion and honesty second to none, especially in tracks like "Long Story" "...

The girl I loved went off and got married to a millionaire, for fifty dollars I'd play five hours in the desert air. Some of us have to hit bottom before we'll ever see above the ground...".

There are some real special moments in this live album; Morse does not leave behind his many music side projects and the little masterpieces he wrote with them and use such wonderful music creations as part of his Encores. When everyone at these shows thought they had been blessed, by witnessing the Spock's Beard wonderful renditions of Wind At My Back or The Light, they certainly did not see coming the gigantic 30-minutes-plus version of the classic Stranger In Your Soul by Transatlantic. No better way to close the whole life circle in music for Neal Morse and his devoted fans on this weekend of Progressive feast.

The magnitude of the album, the artistry of Morse and the whole array of musicians accompaining him are first class. Even the slightly indulging instrumental moments can be easily forgiven, given the spectacular level of craftmanship on this live album. For Those About To Prog Rock, as Neal Morse certainly represents beautifully, We Salute You.