Thorbjorn Risager & The Black Tornado - Songs From The Road 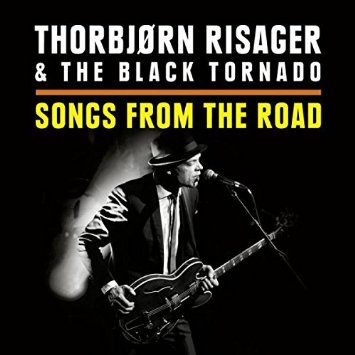 Too Many Roads, the music masterpiece Thorbjorn Risager & The Black Tornado released last year was not just a coincidence. The Danish collective recorded a bunch of excellent albums prior to their 2014 universally acclaimed album but, as often happens in the strange world of the music industry, they got media attention just in their native country.

Last year's album projected Risager and the band so far that their album was recognised as one of the best albums of the year by many Blues magazines and medias in general. Flying high on Too Many Roads' worldwide success, Risager & The Black Tornado decided to record a live album in Germany, one of the countries where some of their largest number of fans are based, through Ruf Records, one of the biggest European Labels and a strong supporter of Risager & The Black Tornado's music style.

The album, released as a CD & DVD, as in the spirit of the Songs From The Road album series, shows in full the immense craftmanship of the whole band. When they hit the stage as a 10-piece mini orchestra, the crowd may just start to wonder how the show is going to unfold and Risager & Co. waste no time.

The attack of If You Wanna Leave is strong, bluesy and ballsy and Risager's voice is one of the deepest, most intriguing voice of the entire music scene. Paradise is sexy in its funky sound, Rock 'n' Roll Ride let the whole band open up their full potential like a music flower, with the the three-piece Horn Section supporting beautifully the strong sonic alchemy coming from Risager & The Black Tornado. Through The Tears is a powerful ballad and one of the most poignant moments of the show, with some  excellent killer guitar solos from Peter Skjerning of The Black Tornado, which showcases his brilliancy even further also on the evergreen Let The Good Times Roll, towards the end of the show.

The whole band is an authentic music machine, ready to switch from blues to funk to R&B, incorporating elements of jazz and rock in a formula that, if considered as a winner on a studio recording, on a live show goes few notches further.

Music is a fabulous art and there are very few bands out there, able to sound as good as Thornbjorn Risager & The Black Tornado. A treat for all music lovers.