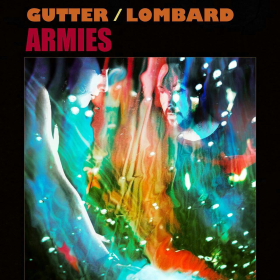 After twenty six years writing funk-rock songs for the seven piece, high energy, Rustic Overtones, Dave Gutter has written what some say may be his best work yet. The twelve songs that make up the ARMIES record are a meld of electro pop with duet style anthems inspired by French Pop of the sixties. When I explain Gutters description to friends, their reply is, “Well, I don’t really know what French Pop of the sixties is like.” My response is “You know, neither do I, but this record is exactly what I would imagine it to sound like”.

Drawing on themes based around temptation and fidelity, ARMIES is the darker, seedier underbelly of love, put to the sound track of a night club bathroom. The project began in Venice Beach, Ca. and Gutter auditioned vocalists in Los Angeles. He then returned home to Portland, Maine and finished the record with longtime friend, singer -songwriter Anna Lombard. The two singing together is pure charm. Lombard’s resume includes work in Gypsy Tailwind as well as her solo career. Enough cannot be said regarding the ideal fusion of Lombard and Gutters vocal tones and depth.

Being familiar with Gutter and Lombard’s previous works, I was intrigued by the music and by the lyrics on ARMIES. On first listen, I was thinking, ‘this isn’t what I would put on as my listening choice’, although I was picking out favorites. On the second listen, I was realizing how much depth there was to each song. And on the third and fourth I was singing along. When most music lovers are introduced to a new style of music, they may be hesitant but usually remain open minded. ARMIES has become music I love and don’t want to replace. The quality of the writing and production is world class. My suggestion; introduce yourself to something a little different, surprise yourself, taste it, be open minded.

The ARMIES album is available for download on itunes. ARMIES can be heard on Spotify and it can be ordered and shipped through ww.bullmoose.com. There is a facebook page for news, updates and tour information: www.facebook/armies