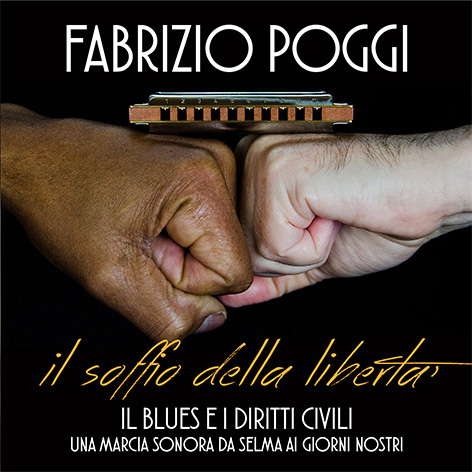 The aim of who creates art, any form of art, is to bring to the masses that message of culture that, in an era like this, too often get soffocated or totally nullified by the Internet and the various Social Networks.

Fabrizio Poggi from Italy is an artist that respects such statement right to the bone. His new record, Il Soffio Della Liberta' (The Murmur Of Freedom) is a labour of love, inspired by the blues culture and the values and the richness of history that this genre carries. The album has been inspired by a theatrical music performance of the Italian Bluesman, celebrating a century of blues through the songs and the stories of those human heroes that have brought the Afro-American population from slavery to freedom.

The album features some brilliantly revised classics, such as Seeger's We Shall Overcome or Dylan's I Shall Be Released and some powerful Traditionals of the Blues, like Oh Freedom or I Want Jesus To Walk With Me.

Poggi has, in this record, stellar Special Guests to help him accomplishing this splendid music project, artists of the highest calibre like The Blind Boys Of Alabama, Eric Bibb, Charlie Musselwhite, Garth Hudson and many more. Musically, Poggi challenges himself in performing those classics, by offering an highly palatable ensemble of Blues, Folk and Americana. And where his voice can't reach, then there is his fabulous harmonica and the class of the musicians accompanying Poggi, creating some really special vibes on this musical history ride. To hear the closing track of the album, the evergreen Amazing Grace, just on harmonica and voice, it is really something special and almost goose-pumping.

There are several references, on Il Soffio Della Liberta', to Martin Luther King and his importance on inspiring Poggi to create this concept album. In one of his most famous quotes, King once said "You can kill the dreamer, but you can't kill the dream". That is the way in which the Italian Artist lives and has always lived his life, by breathing, thinking and living the dream of Blues every single day through his enormous talent.

A work of love, honesty and class. Il Soffio Della Liberta' is musical food for soul.

Il Soffio Della Liberta' can be purchased via Amazon Italia.

Fabrizio Poggi will be touring the United States, please see Tour Dates below: