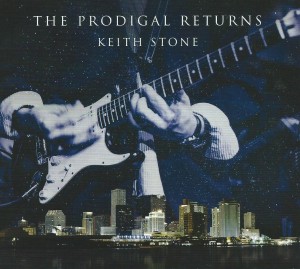 There are cities around the globe that have got very strong legacies with music history and New Orleans in USA is, without any doubts, one of those cities.

Born and bred in the Louisiana state's largest city, the guitarist and songwriter Keith Stone has been breathing and living the strong music message of his hometown all his life at 360 degrees. The Prodigal Returns, Stone's solo debut album, it's more than an album. It is a love letter to his roots.

Stone travels, throughout the album, with the grace of an experienced raconteur on playing Louisiana's most recognisable music trademarks. Better Things To Do is a robust R&B track, enriched by a superb Horn Session, whose contribution will play a vital part through the whole album. First Love is a slow and sexy killer blues, in which Stone's artistry emerges in full not just through the beautiful sound of his guitar but also through his deep and meaningful singing voice.

The opening Prelude is the most delicate intro to a record one can think of and, at the same time, to the closing track of the album Just A Closer Walk With Thee. Stone couldn't prepare the listeners any better to the musical journey that he has planned for them. Dr. John's is the special guest on this spine-tingling piano solo opener, which evokes beautifully the atmospheres of the old New Orleans of the '60s and '70s.

Atmospheres that get amplified even further through the album closing gem, the above mentioned Just A Closer Walk With Thee. The tune encapsules splendidly the whole meaning of The Prodigal Returns album, through a sonic feast of jazz, blues and dixieland.

The album has still got so much to offer. Take Me Home is a ballad that has got the soul style typical of the Stax Records period and Stone's voice is such a perfect fit that would have easily made Jim Stewart (Stax's Founder) a very happy man. Time To Move On is a smooth funky tune, in which, together with Stone's great guitar sound, David Hyde on bass (which has also written all the horn parts as well on the album) gifts the song with a nice, slick tempo, creating the perfect sonic ground for Stone's improvisations.

The Prodigal Returns is a very accomplished record and a revered homage to the sounds and history of one of the most important musical cities in the whole world. And full credit to Keith Stone for delivering such a classy record.

The Prodigal Returns can be purchased on Louisiana Music Factory