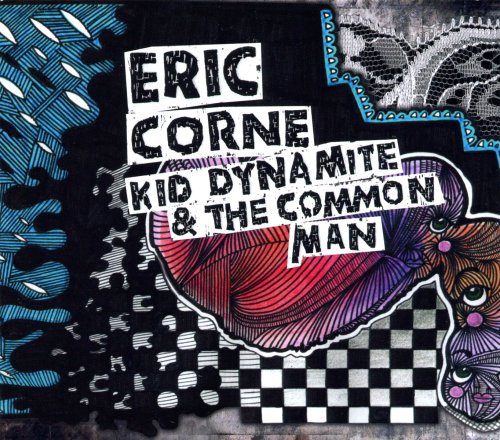 Eric Corne is one of the most talented producers and engineers in the music business. He had never done a solo album, despite working with the cream of the music scene. Finally, October 2015 saw the release of his debut album, Kid Dynamite & The Common Man under his label Forty Below Records.

The record certainly has many fascinating elements and what may escape some, is the fact that this is not just a beautifully conceived and executed album but is also an autobiographical one too, in our opinion. Kid Dynamite & The Common Man is the tale of two sides of the same personality, in a record almost split in half. The first part of the album concentrates on the flamboyant character of Kid Dynamite, the second one on The Common Man, the perfect portrait of a standard citizen.

Corne plays cleverly his cards, both sonically and lyrically. While Kid Dynamite sees the world in an ambiguous way through Corne's lyrics, at the same time the music marches perfectly with the internal conflicts of the character. The Canadian born artist alternates change of music tempos within the same track with great creativity and Kid Dynamite reflects ad hoc the exhuberant and versatile approach to music of Eric Corne.

Kid Dynamite & The Common Man sees a great array of guest musicians contributing on the album. Thanks also to their great craftmanship, Corne manages brilliantly to exploit his Kid Dynamite's side by stretching his sonic artillery. From the almost pop-esque Dead End, with some extraordinary overlapping layers of harmonica and keys supporting the harmonic carpet created by Corne to the hypnotic alt-rock of Not Familiar, in which Corne/Dynamite sees technology and things like Big Brother as "..eye in the sky, designed to take control of you".

The transition from Kid Dynamite to The Common Man, on the album is very smooth. The sounds become more intimate, almost West Coast style, especially in tracks like Evil Men or Blackguard. The character of The Common Man allows Corne to talk about love (I Know A Girl), disillusion and hope (Nobody Plays) and socio-political issues, such as in the closing Common Man, where "A once great nation's fallen ill, a schoolyard bully hooked on pills, with one hand on the Bible and a hand inside the till".

It's a record full of pleasant surprises, where Corne fully succeeds in using the characters of Dynamite Kid & The Common Man to describe the many layers of his talent. Where the lyrics cease to tell about state of minds or personal feelings, Corne lets the music flow, as a catarthic vehicle to allow the listeners to try and explore, on their own, corners of the soul that sometimes words are unable to express.

A record of remarkable artistry for an artist of great intelligence and talent.