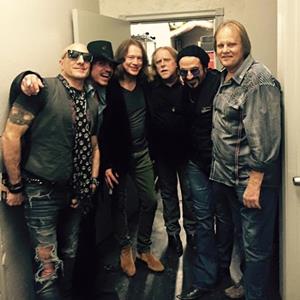 This is more than a record. West Of Flushing, South Of Frisco is a tale of deep friendship amongst musicians, all tuned towards the same goal and playing with their hearts on their sleeves.

Supersonic Blues Machine is a music project born partly by destiny and partly by a wonderful musical chain reaction. Fabrizio Grossi (Bass Player, Producer and Mixer) and Lance Lopez (Guitars and Vocals) have been friends long before Supersonic Blues Machine was born. In 2012, they hooked up together in Los Angeles and after just a day and a half in the studio, they came up with three songs, planting, almost by accident, the basis for what then became the SBM project.

West Of Flushing, South Of Frisco is a modern masterpiece and one of the contenders as blues/rock album of the year 2016. Grossi, Lopez and Aronoff synchronicity and interplay on every track of the album is as close to perfection as it may possibly be. This record is an enchanting rollercoaster of rhythms, harmonies, brotherhood, redemption and forgiveness, all wrapped in one of the best musical packages available right now in the music business.

I Ain't Falling Again is an almost 70's rock sounding tune, that digs deep into the personal life of Fabrizio Grossi. The drumming provided by Aronoff cadences ad-hoc the inner feelings unraveled by the lyrics and constitutes one of the many highlights of the record. Even when the band decides to do a cover, the results are outstanding. Ain't No Love (In The Heart Of The City) kicks in with a thunderous guitar riff, then gently slows down and then the tune opens up again with the keyboards, in a crescendo that allows then the whole band to blend into the song. Lopez's versatility, throughout the album not just as a guitarist but also as a singer, is second to none. His voice, particularly on this tune, is as warm and emotional that would have made Bobby "Blue" Bland utterly proud.

Supersonic Blues Machine is a big music family, one of the largest and healthiest. And when family calls, every member comes in and help out in the best way possible. Each and every friend of the band adds his personal touch to each song in the way they find more natural. There is no showing off involved, just pure fun and a genuine will to jam together. You can sense the fun that Billy Gibbons feels by playing on an almost autobiographical (for him) track like Running Whiskey or the happy swagger running through Chris Duarte's Stratocaster during the funky tempo of That's My Way.

There are some truly sublime musical moments, both from the band and their Special Guests. Warren Haynes provides some very inspired guitar riffs on that splendid Americana ballad that is Remedy, without a doubt another very inspired moment of the album. Supersonic Blues Machine show no signs of slowing down the intensity on this majestic album. Can't Take It No More seems almost a song designed specifically for Walter Trout's playing style. Trout superbly creates an highly effective otherwordly feeling on this track, through his vocals and his unmistakable guitar sound.

When one starts to think that the surprises are over, the evocative sound of the ballad Let's Call It A Day takes the listeners to another unexpected spin on the Supersonic Blues Machine's musical rollercoaster. Robben Ford's playing style is dreamy and succeeds brilliantly to bring to the album those colours and flavours of the 60's West Coast era. The closing Watchagonnado is a hymn to the band's attitude; it's a funky tune with tinges of blues, describing what Jesus Christ's point of view would be, should he be back on earth and realizing how much humans have trivialised and twisted his teaching.

West Of Flushing, South Of Frisco is an eponymous sonic journey through past, present and future of blues and rock. It's creativity and fun, it's artistry and improvisation, it's irony and seriousness. Most of all, it's a message of true love for music and a celebration of cameraderie among musicians.

West Of Flushing, South Of Frisco is released on 26th February via Provogue/Mascot Label Group