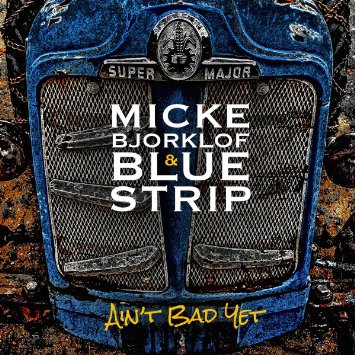 One of the many positive aspects of music genres like Blues, Roots or Americana is that one doesn't necessarily need to be a native American to be able to play such types of music, as long as there is the right commitment and enough heart and soul from an artist.

Micke Bjorklof & Blue Strip from Finland, at their sixth album have successfully managed to create the right blend of all the genres above mentioned with class, elegance and, most of all, great artistry. Ain't Bad Yet, their new record, shows in full the great eclecticism of a band that has reached an incredible musical maturity as years go by.

There are some truly inspired moments on the band's new album. The opener Last Train In Memphis is the perfect introduction to the album. Bjorklof's electric guitar and Lefty Leppanen's slide guitar duel with great synchronicity, with Teemu Vuorela's almost jazzy drumming style to support beautifully the rhytmic canvas of the song.

Train In Jerusalem is a rousing Blues-Rock ride that has got all the criterias to become an international hit, sustained admirably by Bjorklof's guitar playing and a singing style that gets better and better over time, just like a fine wine.

Rat Chase reveals a slightly more Funky-Jazz side of Bjorklof & Blue Strip while the track Today reveals in full the Protean capacity of a band able to incorporate, in a three-minutes-plus song, elements of Blues, Folk and Americana with such lightness and consummate craftmanship at the same time.

Make no mistakes about one thing; Micke Bjorklof & Blue Strip are at the top of their forms and they mean every note they play and sing in each of the eleven tracks of Ain't Bad Yet. Without a doubt, the peak of their musical career so far.