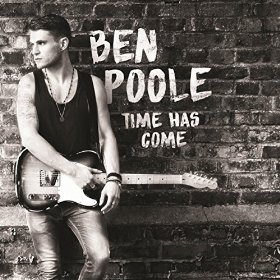 An album title like Time Has Come could have never been more correct. Ben Poole's new studio album is a clear statement on the British gunslinger's ability to flex his musical muscles at 360 degrees, on his new release.

Time Has Come, masterfully produced by King King's drummer and producer Wayne Proctor, is an accurate portrait of the artistic growth of Poole's career so far. Where the 2014 Live At The Royal Albert Hall album showcased Poole's ability as a live performer on many levels, Time Has Come demonstrates instead how this artist has matured as a songwriter too, on his new studio album. The songs on the new record often outline love matters and relationships, which Poole is able to deliver with great craftmanship through some real killer guitar solos and through his voice, which becomes better with each passing album.

The Guitar Virtuoso from South of England practises very well, at times, on Time Has Come the musical preaching of artists like Robert Cray or Jonny Lang still maintaining a personal trademark on every track.

Longing For A Woman is Poole's personal vocal masterpiece of the album. Rarely, in the past, the British artist has been able to deliver vocals of such great intensity as much as he has done on this song.

The album shows in full also Poole's great musical background. If You Want To Play With My Heart and You've Changed bring back timeless memories of the Motown soul period, through Poole's impeccable deliveries.

I Think I Love You Too Much and Time Might Never Come are two authentic blues pearls, in which Poole is able to craft soft, crepuscolar atmospheres through his phenomenal ability as a guitarist. The latter contains one of the best guitar solos that the British artist has ever recorded in his career.

The closing The Question Why has that unmistakable, catchy blues and soul combo of styles so close to the heart of Poole's artistic background, with an excellent work on bass by Steve Amadeo.

The British guitarist and songwriter clearly demonstrates, on Time Has Come, his complete versatility and talent on an album that sees him reaching a new high of his career. An excellent comeback for a rising star.