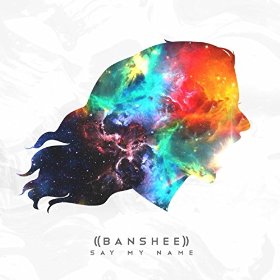 It's a new beginning for the Scottish electro alt-rock band Banshee. Previously known as Life On Standby, the UK quartet has decided to start a new chapter of their music career, although remaining loyal to their trademark sound.

Say My Name, their debut EP under the new artistic identity, is a little dynamite box of energetic rock tempo. The record carries sonic influences echoing the likes of bands such as Yeah Yeah Yeahs or Biffy Clyro and translated through the powerful voice of Erin Donnachie and the incessive drumming of Gianluca Demelas.

The secret of their winning formula is not, though, just the talent of Donnachie and Demelas. The band's unique sonic recipe spices up cleverly their detonating sonic attack by adding an excellent work throughout the EP by Gavin Williams on keys and Liam Walker on bass, especially on tracks like Eagles and the closing Landing Strip.

The 5-tracks Say My Name is a refreshing work of a band that has been working very hard on finding their own music formula and succeeding, overall. Banshee's offering on this EP balances well the aggressiveness that comes from a genre like rock, combining to it a good dose of melody, enough to guarantee surely, to the Scottish quartet, plenty of airplay on radios or any kind of media.

If Say My Name is the appetiser, music fans will be impatient to taste the next musical main course to come in the future.

Say My Name is out now via Banshee's Big Cartel