Chris Ross and the North: Over Lonesome 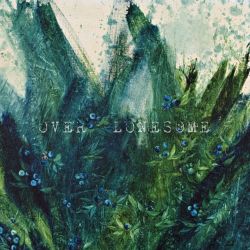 Supporters of Chris Ross and the North get behind the band to raise funds to record Over Lonesome. Those who visited the band's PledgeMusic page could pledge to pre-order the upcoming album or memorabilia, e.g. handwritten lyric sheet, private guitar lesson with Zack, personal video of the band singing Happy Birthday to the pledge, and receive exclusive updates and insights into the album making process. A real win-win for everyone. 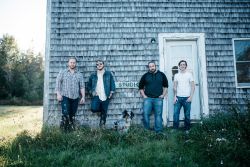 Chris Ross and the North formed in 2015 after Ross set aside a successful singer/songwriter, solo career (2014 Songwriter of the Year, New England Music Awards) to join forces with Caleb Sweet (bass, backing vocals), Zachary Bence (rhythm/lead electric guitar, keyboards), and Ryan Curless (drums, percussion, backing vocals). Before long, the foursome were fully involved in recording their debut album, under the direction of Producer/Mixer, Jonathan Wyman, at The Halo, Windham, Maine. Young Once (June 2, 2015) received high praise from local publications and reached #1 Best Selling CD at Bull Moose music chain, where it remained for six consecutive weeks. Singles, “Annabelle”, “The Long Way”, and “When The Dark Allows”, featuring Kenya Hall on vocals, had instant appeal with Maine radio listeners and live audiences. I recall one DJ as saying, “It’s the best in local music right now.” The North has shared the stage with The Mallett Brothers, Adam Ezra, Pure Prairie League and Johnathan Edwards (to name just a few).

Fans will appreciate a cross mix of styles on, Over Lonesome, from Nashville-influenced rock to adult contemporary, singer/songwriter to throwback R&B soul. There's a little of something for varied music tastes. For example, the lead song, “Dangerous Man”, has a country vibe but is not. Ross's husky vocals and Bence's hollow riff conjure images of a weathered rider crossing some faraway, dusty plain, hungry for his next prey. Ultimately, it's the energy and guitar work that catapults this track to another galaxy, where rock 'n roll is the mainstay beat. Then, on “Every October”, true love, loss and the struggle to move on, touches the very core of human connection, especially so if you've ever shared such a meaningful love. As Ross holds notes until his breathe gives way, I'm reminded of why I believe he's one of the most talented singer/songwriters today. This endearing lament ranks high on my favorites list, as does "Easier Said Than Done ", off Young Once. I suggest you grab the tissue box!

If you frequent the Maine music circuit, you're aware of the collaborative spirit Maine musicians share. And fans reap the benefit. A number of notable artists get behind Chris Ross and the North to add their stylized brand to multiple tracks. Anna Lombard (Anna Lombard Music; Armies) delivers a rousing vocal on, “Just My Luck” and “Cigarette States”, two guitar-driven, foot-stomping rockers. On fiddle, Andrew Martelle (The Mallett Brothers) adds Acadian flavor to “One Days”, while Brian D. Graham (Sister Sparrow and the Dirty Birds) on saxophone, John Maclaine (TheFogcutters) on trombone, and Phil Rodriguez (Sister Sparrow and the Dirty Birds) on trumpet, generate a throwback vibe on “Once Upon a Time Kind” and “Seventeen”. Dustin Meadows (The Meadows Brothers) on harmonica, raises the stakes during the all-out jam-band portion of "Second Chance Saloon". Other guests include Gina Alibrio and Russ Condon on harmony vocals.

Closing out the album is, "Same Town", a thought-provoking, call-to-tolerance ballad. Here, Ross reminds us: We're connected. "We all got the same shade beating in our hearts."

Music is subjective, and personal. Is it the energy or emotion in song that keeps our attention? I guess the only person who knows which makes the greater impact is, the listener. These 11 original songs are exceptional and a lot of fun. If you're an alternative, contemporary, or country/rock fan looking for something new, you can't go wrong with Over Lonesome. I know the next time I see Chris Ross and the North performing at my favorite venue, I will not be chair dancing: I'll be up on the dance floor, shuffling to the groove, fist-bumping with my music friends, and singing along.

Over Lonesome is available June 2nd at Bull Moose, Amazon, and iTunes. Two album release events are planned for at The Criterion Theatre in Bar Harbor on June 2 (Tickets will be on sale very soon at www.criteriontheatre.com.) and at Portland House of Music in Portland on June 23. Follow Chris Ross and the North on Facebook.

A big shout to Chris Ross and the North for the privilege to review Over Lonesome. What a great album, guys!

Other reviews by Bluebirdreviews writers include:  Chris Ross and the North Release Young Once, Chris Ross: Halfway to Wonderland and Chris Ross: The Steady Stumble.

Photos and video courtesy of Chris Ross. All rights reserved. 2017.