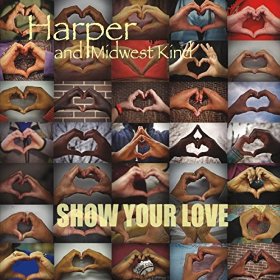 Music is one of the very few art forms able to express not just sounds and rhytms but also the traditions and history of countries worldwide, a bit like a paint would do. If Peter D. Harper was a painter, he would have been certainly an expressionist.

Nobody better than this versatile and extraordinarily talented artist from sunny Australia is able to enfuse his songs with Aboriginal sounds mixed with the blues of the 50's and 60's with touches of roots and R&B. An original formula that the Artist Himself likes to call World Blues.

Accompained by the Detroit-based band Midwest Kind, Harper's new album Show Your Love is a breathtaking sonic kaleidoscope, a journey divided in 11 tracks that fully catapults the listener in Harper's personal take on blues and rock. Frankly, not many artists have been able to deconstruct and reassemble those two genres in the last 25 years in such a clever way as Harper has done, especially on this album. Through his incredible talent as a multi-instrumentalist, the English-born artist has been able to apply new layers and shapes to his personal vision of rock and blues, combining to those qualities an excellent and versatile singing style, depending on the genre played on each track.

Show Your Love also epitomizes, more than any of his previous albums, Harper's excellence in playing harmonica, didgeridoo and djembe.

There are many moments of true brilliancy, on this record. The rootsy It's All In The Game starts with a droning didgeridoos that gradually unveils an irresistible foot-stomping tempo.

Drive Brother Drive is a magnificent stripped down acoustic track, where Harper showcases his many talents once again on harmonica and djembe.

His vocals on the whole album are as clean and perfect as they can possibly be, demonstrating furthermore the great skills of such a polyhedric artist as Harper is. The Midwest Kind provide a solid support to Peter Harper's music throughout the whole record and it's almost impossible to find sonic smudges on this immaculately recorded album.

Show Your Love is where music pays gratitude to the past by incorporating the present and building ground for the future. Harper's new album is, undoubtedly, the pinnacle of his career so far.