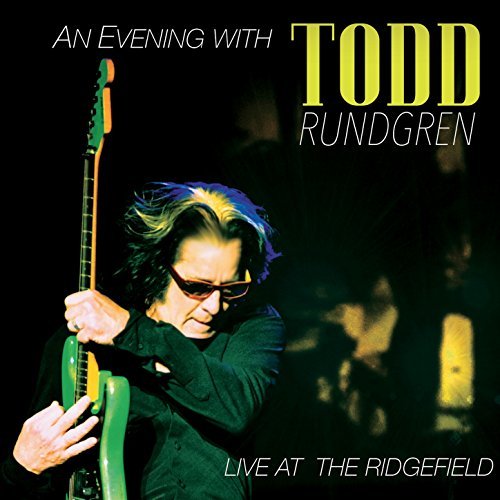 In an ideal musical encyclopedia, it becomes an impossible task to place Todd Rundgren in a specific category. Multi-instrumentalist, producer, singer/songwriter, sound engineer and, most of all, a great music experimentalist, the Pennsylvania-born artist has written among the most inspired musical pages of the last half a century of music history.

Recorded at The Ridgefield Playhouse in Ridgefield, Pennsylvania, Rundgren's new live album is the one that better paints the most faithful portrait of one of the most original artists ever. This live concert, recorded at the end of 2015, incorporates the highlights and, at the same time, some of the less known songs of Rundgren's incredible career.

Despite a slightly shaky start on I Saw The LIght, one of his most famous hits, Todd Rundgren and his band lead the crowd through a whirling and enthralling setlist, combining the most glorious moments of Rundgren's solo career with many songs not played by the American artist for a very long time, belonging to his 70's music projects Nazz and the prog-rock orientated one called Utopia.

What really impresses about Rundgren's performance on this live album is, at this time of his life and career, the capacity of combining a hugely inspired and eclectic songwritng with a truly unique interpretation of his songs, through his voice able to carve a song in the same way a sculptor does with one of his most precious works.

It's incredibly difficult to pick highlights in a stellar performance like this that combine Philadelphia Soul, Funk, Rock and even Ska. Thankfully, Rundgren dig so much deep in his vast music catalogue and gifts the Ridgefield crowd with a stellar version of Lost Horizon, a splendid soul tune from the 1985's album A Cappella. Rundgren's interpretation is certainly one of the best he has ever done in a live format of this song. Buffalo Grass, Kiddie Boy and Drive are epic rock and roll music lashes, in which Rundgren reminds us once again how talented he is as well as a guitar player.

Bang The Drum All Day, another of Rundgren's pinnacles of his great music career, is pure joy to listen to, with that catchy ska tempo that brings the whole Ridgefield Playhouse to a total  crowd partecipation. Love Science, available only on the DVD that comes together with the CD, transports the crowd in a funk universe through a stunning rendition of a song that shows once again Rundgren's great ability to evolve himself as a musician. Ability combined with an incredible understanding of music at 360 degrees that very few artists in their lifetime have been able to match.

An Evening With Todd Rundgren - Live At The Ridgefield is certainly, among the many live albums that Rundgren has released in his fabulous career, the one that shows the most the talent, artistic honesty and versatility of this American artist. At the respectable age of 68, his energy and passion for music are highly infectious and admirable at the same time. Rundgren is an unstoppable music machine and a highly meticolous connoisseur of any music genres. As he sings in another of his most famous hits and closing track of this live album, One World, "... Down here in the street, we got it under control...". Judging by this fabulous performance, there is no doubts that he still has got it all under control.

An Evening With Todd Rundgren, Live At The Ridgefield is out now and can be purchased here