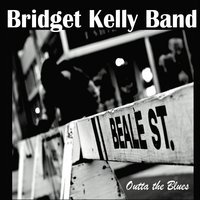 2014 has been a memorable year for the Bridget Kelly Band. Their second album Forever In Blues received numerous accolades, both from the press and blues fans in the United States. making many believe that the band must have been feeling slightly under pressure through the making of their third album.

Outta The Blues, their new record, confirms once more the elegance and class of a band that is able to spread their music wings even further on their new offer, by combining the unmistakable trademark sound coming from Beale Street in Memphis with a more robust Texan blues/rock one.

The outcome is a wonderfully crafted album, in which the arrival of a brand new rhythm section made by Mark Ambrecht on bass and Alex Klausner on drums, add the perfect sonic ground to the silky, smooth voice of band leader Bridget Kelly and the powerful guitar sound of that magician of the instrument that is Tim Fik.

Recorded at Alpha Sun Studios in Gainesville, FL, Outta The Blues is a record that dazzles the listeners in many ways, either by offering moments of flawless vocal deliveries by the very talented Bridget Kelly, such as in tunes like When The Nighttime Comes, Lovely Time In June and Sweet River Blues or through the many thunderous guitar solos of Tim Fik. Fik's pinnacle of artistry on guitar reaches the absolute best in the song Dangerous Man, containing an authentic killer solo.

The band is in great form and there are moments of sheer brilliancy on the album. The cover version of Up And Gone/Smokestack Lightning is truly inspired. The song is the perfect fit for Bridget Kelly's singing style and the musical ability of each individual band member.

Touches of funk emerge here and there on Outta The Blues, making tunes like If You See My Baby or Hard Time In The City sound even more palatable and entertaining, ulterior signs of an artistic maturity that gets better and better on each passing albums of the Bridget Kelly Band.

The powerful Rocket To The Moon closess the record in the best way possible, through another excellent performance of the whole band in a tune that fully showcases the band's craftmanship in all its beauty.

Outta The Blues is a message of love and passion for the blues and also a record that confirms, once again, the Bridget Kelly Band as among the best blues crusaders worldwide.