Beth Hart - Fire On The Floor 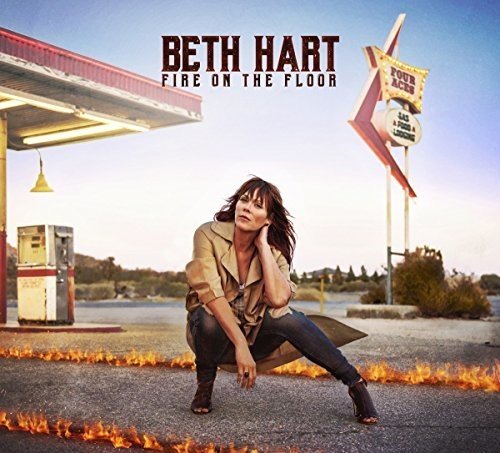 The music industry is one of those many businesses in which you may find either artists very good about selling an image of themselves far from their real personalities or others unable to fake, in the slightest, who they really are, what they stand for and the places in their souls where their songs come from.

The latters are those every day's heroes who wear their hearts on their sleeves and often make of music the only possible vehicle through which they are able to express their fears, joys, hopes and disillusions and in that respect, Beth Hart certainly fits the brief.

Written in a particularly difficult time of her personal life, Fire On The Floor, Hart's new album, is a definite step up from the artist's latest and commercially successful album, Better Than Home. Fire On The Floor it's an album that depicts perfectly the singer and songwriter's urgency to find refuge in one of the very few things that helped her throughout her life, which is writing music, as remedy to fight bad things happening while she was working on this record.

To help Hart to strike the right artistic balance between the power of her beautiful voice, the sharpness of her songwriting and to find the right musicians able to translate Hart's abilities into music, Oliver Leiber, one of the most acclaimed producers in the business, came into the scene.

Leiber's supervision on Fire On The Floor was certainly a vital element, especially by helping to bring into the studio to record with the L.A. artist top class musicians like Michael Landau on guitar or Rick Marotta on drums, just to cite few of them. Combining excellent studio musicians to the high quality of the songs written by this phenomenal singer/songwriter, it makes of Fire On The Floor one of the most accomplished and beautifully written albums of Hart's entire career so far.

It is a record made of two separate halves. The first part shows a dazzling Beth Hart exploring, through her unique voice, a serie of different genres with such vocal agility to render anyone listening to this record speechless. From the opener Jazz Man, a song evoking 30s and 40s smoky club's atmospheres to the playful and happy rootsy vibes of Let's Get Together, the Californian artist doesn't fail to impress on any moment of the album, no matter whichever style she sings. Hart's voice is one of the most beautiful instruments ever created by the hand of God, something that can recreate the same goose-pumping feeling that a guitar riff, a piano solo or an entire Horn Section can give, all at the same time through her incredible vocal versatility.

When Hart pushes on the rock and roll accelerator, she becomes absolutely unstoppable. Fat Man is a tune that Beth Hart wrote several years ago with a songwriter called Glen Burtnik but never finished completely, until now. Landau's guitar riff that runs throughout the song is infectiously mesmerising and Hart's vocals are as sublime and powerful as much as they sounded in a memorable live album at the Paradiso club in Amsterdam Hart recorded several years ago.

If there is something that Beth Hart is never short of, it's passion. Passion for life, people and love. That very same love that sometimes can be either the Baddest Blues or A Lie, as she sings halfway her new record, through a tune called, infact, Love Is A Lie.

Love is the key word that defines the second half of the album, in an initial downward spiral that finds its focal point in one of the most poignants songs Hart has ever written, called Woman You've Been Dreaming Of. The song tells a tale of betrayal, a moral one more than a physical one, in which the singer/songwriter describes in such an intense way, the pain, sadness and sufferance she is going through when she realises that the love of her life is losing interest in her.

Another splendid musical moment, among many, on Fire On The Floor is the song called Picture In A Frame. Hart becomes one of the most inspired lyricists in the world, especially when it comes to capture her emotions under form of a song, as in this case. The tune is all about the desire to bring back the initial sparkle between a man and a woman and to re-live those moments that built the palace of their love through a serie of images, moments stopped in time through the eyes of a camera. Hart's singing style is incredibly honest and it's impossible for the listener not to empathyze with what she is expressing through the magic of her voice.

The closing song of this superb record is about something that Beth Hart has been mentioning few times lately, during press conferences. No Place Like Home talks about the need of the L.A. artist to be able to spend a bit more time in the comfort of her own place, trying to maximise every minute of her life, perhaps even at the cost of slowing down a little with her very intense Live Touring schedule.

Fire On The Floor is the culmination of what Beth Hart is in her entirety. One of the most naturally gifted female artists worldwide, a passionate and warm-hearted woman and, at the same time, a vulnerable and sometimes tormented soul. This is an album that shows an artist at the peak of her career, both as a singer and as a songwriter. It's Beth Hart's ultimate songbook and her personal masterpiece.