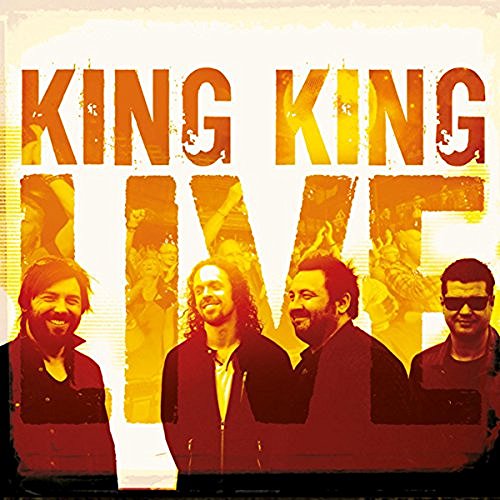 Rock music has changed a lot in the last 3 decades of music history, assuming different shapes and shades through the incorporation of music elements belonging to different genres. The meaning of what many identify as "Modern Rock", today, can be best described as a combustion of 70's prog-rock with fragments of funk and blues and in this moment in time, not many bands in the United Kingdom are able to play Modern Rock with such perfection as well as the Scottish band King King does.

With three previous albums in the bag and a triumphant history of six years On The Road spent together as a collective, in which King King have received many awards and repeatedly recognised by the press as one of the best rock bands in the country, the Scottish quartet has now decided that this is the right time to release a live album that would capture perfectly the intensity of their live performances.

Recorded in two of the band's most favourite venues, Live is a 2CDs plus a Bonus DVD album that displays a band in excellent form. King King is a collective that assembles 4 highly skilled musicians, which all contribute, through their individual skills, to build a marvellous wall of sound on stage or in studio. Bob Fridzema on keyboards is a real master in carrying, with his artistry, the Progressive Rock part of the King King unmistakable sound, something that can be easily spotted on the Live album in the opening Lose Control or in another outstanding track like All Your Life. Wayne Proctor on drums and Lindsay Coulson on bass guitar are such a perfect rhythm section, maybe among the best in Europe. Their alchemy, on stage, is so highly in tune to make them sound like their instruments are joined together as one, with flawless results.

Their band leader, Alan Nimmo, is certainly one of the most respected and talented guitarists and singer/songwriter in the country. When it comes to write songs, the Glaswegian artist possesses such a natural ability in writing lyrics and modelling the sound of the band in a unique way that provides the best possible sonic outfit to the songs he writes. Nimmo's singing style can be emotionally intense or thunderous and travel side by side with his ability to play guitar, depending by the tempo and the theme of the song King King play. Waking Up and You Stopped The Rain are the perfect demonstration of Nimmo's artistry at 360 degrees and among the most beautiful songs ever written by the Scottish artist.

King King is, undoubtedly, one of the best bands in the United Kingdom nowadays. Every time these four musicians work together on stage, the harmony, brilliancy and quality of their sound explode in full, like in tunes like Crazy and the closing Let Love In, where the talent of this formidable quartet get fully unfolded with remarkable results.

Live is an album not just for long-time fans of the band but also for those that never had the chance either to listen to any of their previous albums or saw them performing on stage yet. The record is not just the celebration of an important moment of their careers but also a statement of sheer class and craftmanship from one of the best UK bands of this last decade. The Ministries of Modern Rock.

Live is out now and can be purchased via Manhaton Records