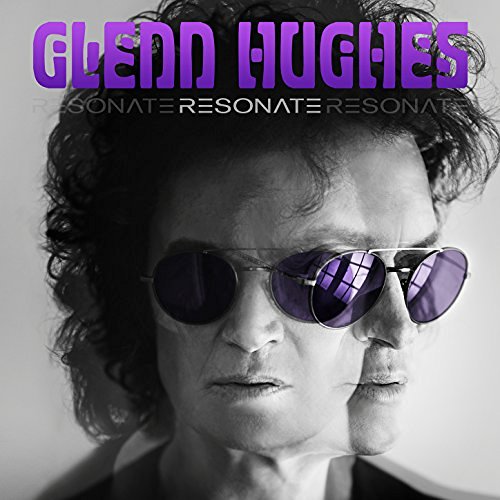 It has been some time now, for Glenn Hughes, to make a new record as a solo artist. After five years spent recording with Black Country Communion and California Breed, Hughes has finally decided to break this long hiatus by releasing his twelfth album, called Resonate.

Few recent health issues have not certainly stopped the beating rock'n'roll heart of a tried-and-true artist like Hughes and Resonate is the definite proof of it. Hughes let it loose completely on his brand new record, by unleashing a free-form album in which the American bassist and singer/songwriter shows all the different sides of his artistry.

Hughes catwalks in many different musical territories, sometimes with unexpected and interesting results and in very few occasions, with slightly less memorable ones. Resonate sees Hughes accompained by first class musicians like Soren Andersen, guitarist and co-producer of the album, Lachy Doley on keys and Pontus Engborg on drums. The musician's skills shine throughout the whole record but particularly on prog-rock musical excursions on the album, such as on tunes like Steady and Flow.

One of the great virtues of Resonate is that it clearly sounds like an album where Hughes had a lot of fun to record. Landmines is the best expression of love and passion for funky music that the Bass Maestro could showcase, on such an eclectic album like this.

Things, though, become more serious when the American artist digs deep into his most congenial musical ground, which is hard rock and metal. My Town, God Of Money and, most of all, the splendid How Long show an artist totally in control of his music and his talent, both as a singer and as a musician. His vocals are still as sharp as razor blades, just as his incredible artistry on bass.

Even little episodes like Stumble & Go, where Hughes doesn't feel like he is playing exactly on his favourite playground, can be easily forgiven. The album closing, Long Time Gone, is among the best moments of the record and, at the same time,  the ultimate apotheosis of what Glenn Hughes truly is; a versatile singer, an extraordinary musician and a sublime raconteur.

Resonate is the return to form of an artist that has given so much to rock and roll in the last four decades and still going on full throttle. Like the finest bottle of Brunello Di Montalcino red wine, Hughes demonstrates through this record that his music tastes better and better as the years go by. Good to have you back, Mr. Hughes!

Resonate is out now and available via Frontiers Music