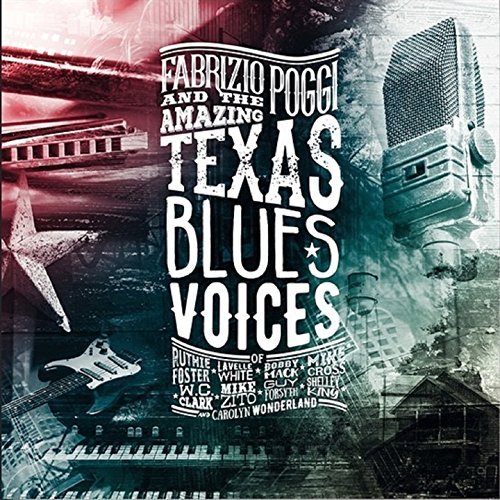 There are not many blues and gospel music fans left in the world that do not know the story of the Italian Harmonica Blues Maestro and music writer Fabrizio Poggi. This incredible artist discovered his great passion and love for the instrument since a very young age, making him, through the years, one of the most revered and respected musicians both by music fans and fellow artists.

Poggi has always been and still is, throughout his career, one of the most prolific recording artists ever. Between solo albums and side projects (the latest being Fabrizio Poggi & Chicken Mambo), the Italian artist has released 19 albums until now. It comes without saying that Album No. 20, Texas Blues Voices, had to be really something special and it most certainly is.

The Italian artist's brand new album is a fabulous tribute to those unique blues vibes coming from the great state of Texas, a place that so much has given and still does to this genre in the last half a century. It's a homage at 360 degrees to some of Texas' most fabulous singers, guitarists and musicians in general.

Recorded in about 10 days in Austin, Texas, the record assembles a stellar cast of singers and multi-instrumentalist artists, which often play a part in each other's songs, either by providing backing vocals or playing an instrument in general, in short, a total and great Team effort. Poggi's Harmonica, as always, provides a genuinely fabulous sonic blanket to all songs, either originals o traditionals, performed by each artist, through Poggi's great class and ability as a musician.

To find one or two highlights on such a well-balanced album, so beautifully sang and played is a mammouth task. The level of quality of every Special Guest's performance on each song reaches peak of truly, sheer perfection. Carolyn Wonderland's vocals on the album's opener on Blind Willie Johnson's classic Nobody's Fault But Mine are first class and her work on guitar is equally remarkable. The same can be said about that fabulous artist that is Mike Zito and his rendition of Muddy Waters and Bernard Roth's Forty Days And Forty Nights, where the Texan blues/rocker's deliver is absolutely pitch perfect.

Poggi has chosen an array of fantastic musicians to provide the right sounds and rhythms to each of the Guest Artists present on Texas Blues Voices. Bobby Mack and Joe Forlini on guitars, Cole El-Saleh on piano and organs, Dony Wynn on drums and Donnie Price on bass guitar are a sublime Music Machine to listen to and their artistry and individual skills are second to none.

Every song constitutes a different vibe, a different journey in the history of blues. To hear perhaps the youngest sounding 86-years-old artist in the world, Lavelle White, who has sang in her career with giants of the blues like Otis Redding, Sam Cooke and Aretha Franklin amongst others, singing a song she wrote about her roots with such intensity and pathos is truly emotional.

Each Special Guest leaves a strong, emotional impact on Texas Blues Voices; Ruthie Foster's version of Ruth and Brownie McGhee's Walk On is one of the most soulful versions ever heard of this great classic and on the same tune, the work of Mack and Forlini on guitars is an unmissable treat for the ears of any music fans.

With all the emotions and the intensity pouring out from those songs present on Texas Blues Voices, Fabrizio Poggi's harmonica keeps working incessantly and beautifully in the background, helping to create that necessary balance that makes every song a bit more special, through his unmistakable style.

The Italian artist couldn't close a stellar album like this in a more perfect way than having Guy Forsyth performing with him a fabulous rendition of the traditional Run On. Poggi's Harmonica and Forsyth's superb job on vocals and National Reso-phonic combined together are an irresistible force of nature and the outcome is simply outstanding.

Texas Blues Voices is an album that screams talent, passion, and most of all, unconditional love for the blues. At the same time, it is a splendid record that deservely rewards Fabrizio Poggi for his talent, his belief and his perseverance in carrying the torch of tradition and history that only a music genre like the blues has in its DNA.

"I guess I gotta keep on walkin', no matter what, till I find my way", say the lyrics on one of the album's songs, Walk On. Fabrizio Poggi will keep on walking with the blues for the rest of his life and we cannot be more thankful for that.

Texas Blues Voices is out now and available via Appaloosa Records