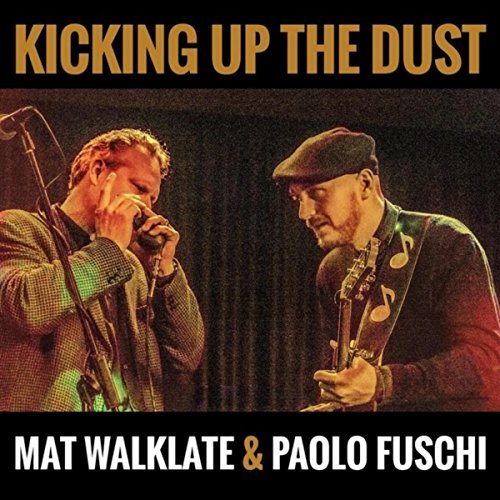 It's very refreshing to hear, in a stage of blues history like this, where the genre is evolving in many different ways, the fact that artists like Mat Westlake and Paolo Fuschi decide instead to stick to the traditions, by releasing an album that is a touching tribute the the sound of the Chicago Blues of the late 40's and the 50's.

Their new, entirely acoustic new album called Kicking Up The Dust, purposely recorded in a lo-fi style in order to adhere to the meaning of their musical message, simply by using Westlake's harmonica and Fuschi's guitar, is a well-crafted portray of blue's deepest roots. It's a record that brings back the song's format back in a time and a place where the intensity of a tune was simply defined by an artist, his instrument and his voice.

Kicking Up The Dust sees Walklate & Fuschi re-interpreting in their own ways some well-known classics of the genre, by adding unexpected touches of brilliancy and variation to the songs present on the album, like the foot-stomping opener Ain't No Big Deal On You or Bobo Jenkin's phenomenal version of Nothin' But Love.

Both musicians showcase an excellent artistic background and tons of musical skills. Walklate's harmonica style has got class and finesse written through and through and his work on Derrick Morgan's classic Fat Man is a true testimony of Walklate's talent. His vocals are deep, delivered with such a style and charisma that bring back echoes of a young Elvis Presley.

Paolo Fuschi is a highly skilled guitarist and his eclectic style allows himself to shine numerous times in the album. Take, for example, Fuschi's guitar solo on Goin' Down Slow, where the Italian artist, thanks to his instinct and his craftmanship, pens the most perfect intermezzo possible for this tune.

Walklate and Fuschi's interplay is pitch perfect and awe inspiring and runs deep through the whole album. The best example of such perfection can be heard in the only original tune of the record written by both the artists called Don't You Know Me, a song that sums very well the level of artistry of this formidable duo.

Kicking Up The Dust is a record that keeps on giving right to the end. Lightnin' Hopkins version of Black Cat Bone is one of the true peaks of this record for intensity and brilliancy from the two artists and the medley of The Technique's Oh Babe (Sick And Tired) and Don Drummond's Man In The Street magically combine elements of ska and blues of the highest level, thanks to Fuschi and Walklate's ability and versatility.

This record is a beautiful, full immersion in the purity of the blues, performed by two artists with a great level of knowledge, understanding, appreciation and great respect for an ageless genre like this. A truly inspired album and, without a doubt, a career defining moment for these two talented musicians.