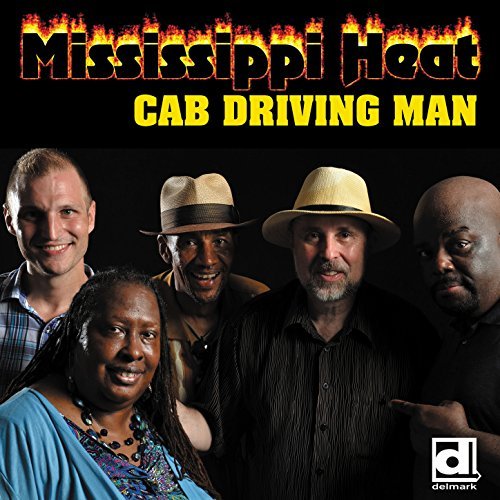 When in 2014 the album Warning Shot by the Chigaco-based collective Mississippi Heat reached the top of the Blues Charts of half of the world, that moment can be remembered as a very significant one not just for the band but for the whole Blues community.

The success of that album was the clear sign that the Blues genre was definitely migrating and transforming itself to something bigger and bolder, still maintaining its roots deep down in those sounds and vibes that have made this genre the most pivotal one in music history ever.

Mississippi Heat's new album, Cab Driving Man, has not just carried the robust vibes and tones of its 2014's predecessor but has even improved the overall sound of the band by bringing it to a new level, thanks to the phenomenal talent of each individual member and the inspired songwriting and musical vision of Mississippi Heat's harpist and band leader Pierre Lacocque.

Throughout the sixteen songs included in Cab Driving Man, the band showcases an artistic maturity of rare beauty. A beauty that transpires every step of the way in an irresistible tracklist that combines the Blues roots of the band with elements of boogie, R&B, funk and latin rhythms in a truly, explosive musical package.

Pierre Lacocque, together with being one of the best harpist worldwide, is also a great connoisseur of talents, when he spots one. He must have certainly spotted so many of them, during his 25 years of career in the music industry and the current line-up of the band is no exception. Inetta Visor is an incredible and versatile singer, capable to show a phenomenal vocal artillery with elegance and class many times throughout the album, like in the jazzy Life Is Too Short, in the wonderfully executed Sarah Vaughan's cover of Smooth Operator or in the unstoppable vocal performance in the funky-spiced Icy Blue.

The talent flies high everywhere in this magnificent Big Band. Brian Quinn on bass and Kenny Smith on drums are an electrifying rhythm section, Chris Cameron on piano and keys is an outstanding musician and Michael Dotson, guitarist and singer/songwriter, is a true genius.

Pierre Lacocque has certainly assembled not just one of the finest group of musicians worldwide, within the band but has also chiseled some of the best songs he has ever written in his career. Music Is My Life has got such a passion that doesn't just transpire through his lyrics but also through a superb performance on vocals by Inetta Visor and Chris Cameron on piano. Lacocque tinges every song of the album with the intense vibes emerging by his Harmonica, providing an ideal music blanket to the already vibrant sound of Mississippi Heat. The work on Harmonica of the Belgian/American artist is truly superb in the ballad Mama Kaila, one of the many highlights of a very refined and well crafted album.

The closing track of the album, the instrumental Hey Pipo!, incorporates the whole spirit of the Mississippi Heat's artistic message. Three minutes of pure entertainment, beautifully executed, with a superb interplay of all the musicians showcasing, once again, the calibre of their immense craftmanship in this free-form tune.

Cab Driving Man is an album that travels to the pace and the grace of a feather swirling gently in the music skies, thanks to the phenomenal twists and turns that Lacocque and his band have designed on this superb album. In the album's sleeve notes, Lacocque says that "An aIbum is a passport, it gives you opportunity to keep growing and travelling". Cab Driving Man is certainly Mississippi Heat's passport for music heaven.