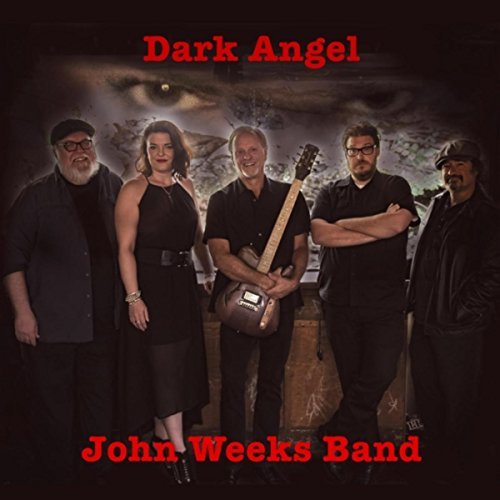 For years, there has been an unjustified rumour in the music business about how much blues artists are capable to play their instruments to perfection but constantly struggling to write great lyrics for their records.

Fortunately, as time goes by, more and more artists show every time, through their hard work and talent how untrue this is, by crafting marvellous albums full of catchy tunes, excellent songwriting and superb musicianship.

The second album of the John Weeks Band from Denver, Colorado called Dark Angel, is the full proof of how a group of skilled musicians can produce, by combining all together their many abilities, all the ingredients needed to create a record with great depth of quality as Dark Angel.

John Weeks, guitarist, vocalist and chief songwriter of the band has been and still is one of the most respected blues musicians of the United States for the last couple of decades. Through the years, he has learned very well how to bring the blues to a new level, by adding elements of swing, jazz and even particles of 70's rock in the already rich and sumptuous sound produced by Weeks and his band.

It's a record where every musician, within the band, has the space to shine and let it loose when the tune allows it, without overshadowing his fellow musicians but just enriching the band's sound even more through their individual skills.

Dark Angel is a finely played album, full of groove and some swagger too. Weeks has got the luxury to have many songwriters in his band, to help him out building a highly entertaining record like this.

Danny Haynes on keyboards and vocals is a true revelation. His songwriting is inspired, his vocals crisp and his work on keyboards an authentic joy to listen to. Stacey Turpenoff helps out as well on the songwriting but when it comes to singing, she is certainly The Lady in the John Weeks Band's house. Her vocal deliveries are terrific and Turpenoff is able to deliver either joy and playfulness, like in the song Devil In My House or intense, deep emotions, like in that splendid ballad that is The Blues Just Got More Blue, thanks to her soulful, powerful voice .

The new John Weeks Band's album delivers many wonderful musical moments. Impossible is a delicate semi-acoustic tune, perfectly executed by a band in stratospheric form. A separate mention deserves How Can You Love Me?, a slow tempo blues tune that exemplify the most the fluidity of sound of this tried-and-true music machine. Stephen Whitfield on bass and Robert Fiorino on drums work in perfect synchronicity with one another. Week's guitar solo on this tune is absolutely outstanding. Danny Hayne's work on piano is, again, top notch and Stacey Turpenoff's singing style is smooth like the sweetest of caresses.

Dark Angel is an excellent record and musically, a vast step forward in comparison to the band's debut album. The John Weeks Band shows all the positive signs of a band destined to a great future in the music business.