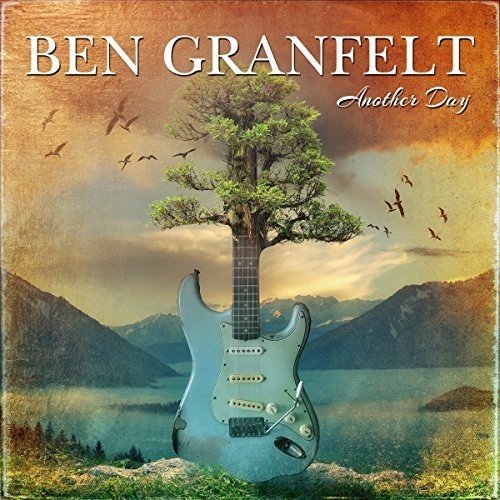 Ben Granfelt is certainly one of the most hard working rock musicians around. In a career span that has seen him playing with some true iconic bands like Wishbone Ash and Leningrad Cowboys amongst others, the Finnish guitarist has then embarked a successful solo career since 1993, becoming one of the most acclaimed live rock acts in many parts of the world.

Another Day, which has been entirely recorded just in three days, captures perfectly the musical simmetry between Granfelt and his band, showcasing as well some inspired songwriting as an extra added bonus to Granfelt's new album.

One of the most interesting aspects of the record as well, it's Granfelt's transition on his guitar playing style, which seems often to nod towards a more blues/rock type of sound, still maintaining though a steady foot in his rock and roll roots.

There is also a great immediacy about Another Day, which comes by cutting the album entirely live, in its recording process. In view of that, one can easily forgive some minor imperfections, at times, on the record, because they are the obvious results of the live recording, something that help the listeners to appreciate even more the rawness and purity of the power trio sound.

There are some greatly entertaining moments in Another Day. Hangman's Tree and Rocking The Boat are fast and furious numbers, while Open Road, Open Book and Heart On Your Sleeve are clear signs of Granfelt's love and appreciation for blues/rock.

What sums Granfelt's class, as a guitarist, is the beautiful and delicate instrumental Endless. The tune, placed cleverly as centrepiece in the album's setlist, shows clearly why Ben Granfelt is one of the most respected and revered guitarists around of the last three decades of rock and roll.

Another Day marks a welcomed return to form for the Finnish Guitar Maestro, able to display, on this record, more and more layers of his talent both as a musician and as a songwriter. An impressive record and a strong step forward for Granfelt's music career.

Another Day is out now and is available via Bluesland Productions